JANE FREILICHER was born in Brooklyn, New York in 1924. She graduated from Brooklyn College and received an M.A. from Columbia University. Afterward she went on to study with the legendary teacher and painter Hans Hofmann, both in New York and Provincetown, Mass. In 1952 she had her first one-person exhibition at the Tibor de Nagy Gallery.

Over her career that exceeded sixty years, Freilicher pursued a distinctive painterly realism. Her work has gained increased recognition for her unique vision, from critics, collectors, and generations of younger painters.

Freilicher is most noted for her sweeping Long Island landscapes seen from her Water Mill studio window, and her dazzling views of downtown Manhattan often juxtaposed with still life objects in the foreground. Michael Kimmelman of The New York Times has called her work, “the essence of serious painting, deceptively modest, steadfast and fluent.”

Freilicher developed her practice in the era of Abstract Expressionism at the center of a group of influential artists and poets, including painters Willem de Kooning, Rudy Burckhardt, Joan Mitchell, Larry Rivers, Fairfield Porter, and Alex Katz; and poets John Ashbery, Kenneth Koch, and Frank O’Hara.

Her work is widely collected and is represented in major museum collections throughout the United States, including the Whitney Museum of American Art, the Metropolitan Museum of Art, and the Museum of Modern Art. Her paintings were selected for inclusion in the 1995 Whitney Biennial. 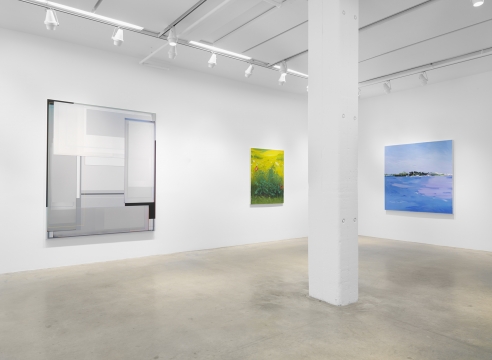