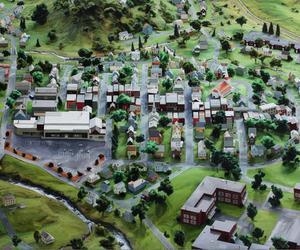 Amy Bennett makes paintings that call little attention to the elaborate process of their creation, but what may seem like conventional landscapes come with a back story that gives us far more to absorb and ponder than what’s visible on the wall.

For "Small Changes Every Day," her recent series at Richard Heller Gallery in Santa Monica, Bennett started with an 8-by-8-foot hunk of plastic foam and built a model of an undisturbed patch of verdant terrain. She painted a portrait of the land as seen from above, a handsome Eden dotted with ponds and etched with streams.

Bennett, based in the Hudson Valley of New York state, then proceeded to mimic the familiar stages of human settlement, altering and building upon the miniature earthly spread. First, farms appear: barns, houses, cultivated plots and fenced corrals. Then come more homes, a school and church, paved roads and sturdier bridges. By the newest paintings, the furrowed lines of the fields have morphed into parking-lot stripes, and the meandering path of the streams is countered by the unbending efficiency of railroad tracks. The dense little town that Bennett represents consists of more than 450 buildings, each of which she first crafted on a tiny scale, in wood and paint.

Her process brings to mind other artists (such as the photographers James Casebere and Thomas Demand) who construct model environments and also a kind of stop-motion recording employed to preserve stages of evolution. Bennett presses the pause button repeatedly, chronicling in broad terms the taming of the raw land, the submission of natural order to the strictures of society. She seems to freeze the process (which may or may not represent progress) in time before her fictive village reaches the present. Uncluttered by commercial signage, unsullied by trash or pollution, it remains quaint and pristine.

Maybe the grit of modern life is there, but we don't see it because we only view this world from a distance, as if from a low-flying plane. Even in the smaller canvases, where Bennett tightens the scope, she keeps that middle-distance degree of detail and the same elevated perspective. She paints skillfully, carefully, with a kind of idealizing detachment. On this stage set, all feels harmonious, polished by the lens of nostalgia.

The verve in Bennett's project lies entirely in her unseen process — the outrageousness of the meticulously hand-crafted model, the obsessiveness of its making, the intimacy of its tiny parts. Bennett exercised godlike power in imagining this world into being — twice. Maybe the second time around she didn't want —  or want for us — to get too attached.