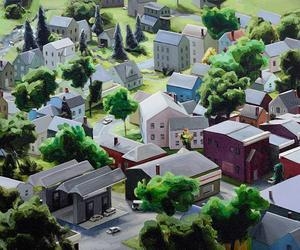 Wilding Cran Gallery is pleased to present Really?, a group exhibition curated by Beth Rudin DeWoody featuring works in various media by both well-known and emerging artists who work in the field of contemporary realism to visually or conceptually challenge the viewer.

I have always been fascinated with photo-realistic drawings and paintings, and trompe l'oeil sculptures—from artists such as Bronzino and Jean-Étienne Liotard, to the Flemish painters and today's contemporary artists. The ability to create art that reflects reality in this way is a skill I admire so much, especially when the artist goes beyond the merely technical to incorporate more conceptual themes and their unique style of art-making. -Beth Rudin DeWoody

Beth Rudin DeWoody, art collector and curator, resides between Los Angeles, New York City, and West Palm Beach. She is President of The Rudin Family Foundations and Executive Vice President of Rudin Management. Her Board affiliations include the Whitney Museum of American Art, Hammer Museum, The New School, The Glass House, Empowers Africa, New Yorkers for Children, and The New York City Police Foundation. She is an Honorary Trustee at the Brooklyn Academy of Music and on the Photography Steering Committee at the Norton Museum of Art in West Palm Beach.

DeWoody has curated numerous exhibitions including I Won’t Grow Up at Cheim & Read, New York; In Stitches at Leila Heller Gallery, New York; Think Pink at Gavlak Gallery, Palm Beach, Hunt & Chase at Salomon Contemporary, East Hampton; Inspired at Steven Kasher Gallery, New York; Bad For You at Shizaru Gallery, London; and Please Enter at Franklin Parrasch Gallery, New York. In December of this year, DeWoody will open a private art space in West Palm Beach, which will present viewable storage of her collection, as well as exhibitions. The space will hold private tours and events.