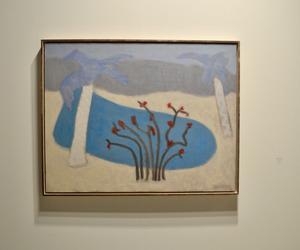 Call your Milton Avery–loving friends and grab a plane, train, or automobile to Miami. (If you don’t have any, just grab some friends and do the same: it’s time to make converts.) The late, great painter and once-in-a-generation colorist, who died in 1965 at the age of 79, is one of the stars of this year’s edition of Art Basel Miami Beach. No fewer than five galleries are presenting his works at the fair, where at least 10 works by the severely underrated American painter are hanging at the moment.

The time is always right for Milton Avery, but he feels particularly prescient right now, when so many young artists are once again plumbing the potential of figurative art, experimenting with faux-naive styles and sui generis color palettes. Avery spent decades doing the same, painting his loved ones and surroundings with an eye-seducing originality matched only by its unusual tenderness.

Avery spent much of his career in New York, and dealers from the city have brought some major work. Ameringer McEnery Yohe has the most topical piece, a 1953 stunner called Florida Lake, with its lush blues and grays set off against a sandy ground. Hirschl & Adler has a wild portrait of a man in a striped shirt and a bright green face, a hill dotted with quick little trees exploding behind him. Paul Kasmin has a quartet of spare works, three with birds out in the wild, standing or flying free. And Menconi + Schoelkopf has one with a trio of birds standing on a pink beach before an undulating landscape of white and spearmint; it resembles a hunk of Neapolitan ice cream.

And then there is London’s Victoria Miro gallery, which has a suite of paintings in its portraiture-themed booth, including a brushy portrait of a woman in green stockings and another of a woman at work before an easel—it is, perhaps, his wife, Sally Avery. A solid Milton Avery can easily set you back more than a million dollars, but thankfully, for those of us who can’t compete in that market, Miro is releasing a two-volume copy of a never-before-published sketchbook that the artist used while working in Southern France in 1952. It costs just £55, or about $74.