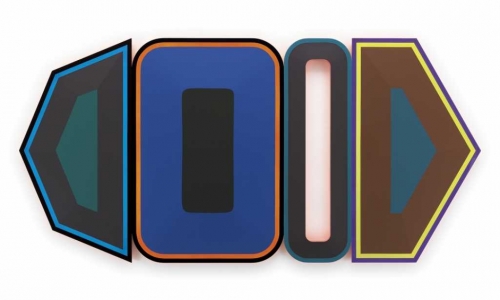 The inviting, and deeply intriguing wall reliefs on view through November 10, 2018 at Miles McEnery Gallery are a continuation of a series Fishman began in 2012.

The works on display are made using urethane paint on cut wood panels.

Their large size and bright color palette are confrontational and bursting with tensions that beguile the viewer’s senses. By painting the edges of the pieces with gleaming fluorescent tones, the colors interact with the white of the wall behind it and give the illusion of a neon glow.

In some of her compositions, the push and pull between flat and glossy finishes toys with the viewer’s perception of space and reality.

“Fishman’s bold, polychromatic wall works meditate on the many parallels that can be drawn between pharmaceuticals and art. Like taking a pill, an experience with art is often brief yet has the ability to induce a response that runs deep within in one’s being. Fishman’s vivid geometric reliefs may not take on the overt physical appearance of pills, but are representative of how pharmaceutical companies utilize aesthetic appeal in their products to offer the promise of a better reality,” the gallery writes.

Each work is optically alluring and carefully crafted, shape stacked within the compositions is assigned an ailment denoted by the title of the work.

The gallery believes that Fishman’s art is able to induce responses that invite the viewer to contemplate not only the ways in which pharmaceutical companies use aesthetics to market their products, but also how they can produce varying versions of reality.

Fishman wrote in an essay for Cultural Politics, our contemporary world is one in which “drugs construct and contest our identities and in which the production and consumption of art can seem like an addiction.”