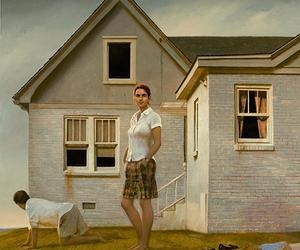 The Delaware Art Museum is pleased to present Truth & Vision: 21st Century Realism. On view October 22, 2016 – January 22, 2017, this exhibition surveys the state of representational painting at the beginning of the 21st century and features approximately 40 works by 20 contemporary realist artists from throughout the United States and Canada.

The Delaware Art Museum has a long history of displaying contemporary representational painting. Many of the artists featured in Truth & Vision acknowledge the impact of artists featured in the Museum’s permanent collection–Jefferson David Chalfant, Howard Pyle, Edward Hopper, N.C. Wyeth, and Andrew Wyeth. While the influences are similar, there is much to celebrate in the diversity of representational painting–recognizable images–today.

Some artists engage directly with traditional artistic techniques, such as trompe l’oeil, meaning to fool or deceive the eye, while others present photorealistic renderings of the post-industrial landscape. Indicative of this moment in 21st-century representational art are two trends–the depiction of the natural world and the creation of fantastic imaginings. Truth & Vision: 21st Century Realism traces the contemporary developments in a mode of painting historically associated with greater Brandywine Valley artists and celebrates realism’s profound and varied development in this century.

This exhibition connects to representational painting seen in the Museum’s collections and throughout its exhibition history,” explains Margaret Winslow, Delaware Art Museum’s Curator of Contemporary Art. “I’m thrilled to present these artists here in Wilmington since many of them have been heavily influenced by the artistic legacy of the Brandywine Valley.”

Through drawings and paintings of the figure, still lifes, and landscapes, the 20 artists in the exhibition draw inspiration from the art historical canon–Renaissance painting, the Hudson River School, American Modernism–and advance realism as a critical mode of painting in the 21st century.

The exhibition was inspired by Robert C. Jackson’s 2014 publication, Behind the Easel: The Unique Voices of 20 Contemporary Representational Painters. Jackson assembled the responses of the 20 artists who share their intentions, inspirations, and even their daily studio practice. A painter himself and one of the artists featured in Truth & Vision, Jackson also has a 2010 painting, The Apple Guy, in the Museum’s collection,  currently on view in the Lynn Herrick Sharp Gallery for contemporary art.