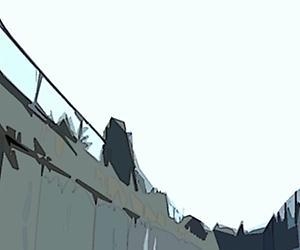 The work of New York-based artist Brian Alfred examines the relations between the media and the real, underscoring the gap between reportage and first-person experience.  Alfred's sources of reference range from news items, which aspire to etch their images in the consciousness of all, to sights taken by Alfred himself while traveling.  Two primary means to his work - fragmentation and abstraction - take us back in their directness to the experimental works of early modernism.  Alfred uses the fragment to claim the viewer's alertness, but as opposed to the avant-garde artists, the world from which he reports appears to be already saturated with and inured to sensations.

The works screened at the exhibition summarize current aspects in Alfred's work, through three of the artist's animation works from the past year.

In Beauty in Danger (2013), Alfred abbreviates extreme close-up images from the Formula 1 racetracks into a colorful array of geometrical forms.  The animation, the fruit of collaboration with Ben Radatz, was inspired by the first attempts at abstract cinema, such as the early 1920s films of Hans Richter and Walter Ruttmann.  Alfred's gaze wanders from the flickering plane to movement within a geometric space.  The race experience is elucidated as a flickering circle of light, which sends the contestant out to experience the world, for a certain period of time, as a sequence of smeared lines, rapidly escaping from the field of view.  The soundtrack accompanying the work, by Ian Williams, also transpires in the range between the supersonic silence and the buzz of the passing car motors.

It is interesting to see Alfred's choice to discard this very same experience of an extensible sequence when he treats documentation from inside the contestant's car.  In Circuit (2014), Alfred follows the course of a single circuit of a Formula 1 racetrack.  The work was made with rotoscopy, an animation method that involves drawing upon a live footage.  Alfred eliminates the frame of the vehicle's dashboard, and isolates and emphasizes the outlines of the landscape passing in front of it.  The result is a sort of dynamic seismograph, through which the materiality of the world outside the vehicle is revealed more tangible than ever.  The almost identical length of the two works, about two minutes, makes it possible to identify a correlation between them, as two different aspects of the same event.

In the program's final piece, Factory (2013), Alfred achieves direct expression, through the technique of rotoscopy.  The work is based on news footage taken at a fireworks factory in Enschede, the Netherlands.  On 13 May 2000, a fire of unknown cause broke out at the site, sparking a tremendous explosion that devestated the entire area.  We behold the structure's facade, and from there we are led to stare at the blue sky.  The picture is filled with rapid gestures of digital drawing, appearing and disappearing in a flash, and in a way reminiscing the hazardous past.