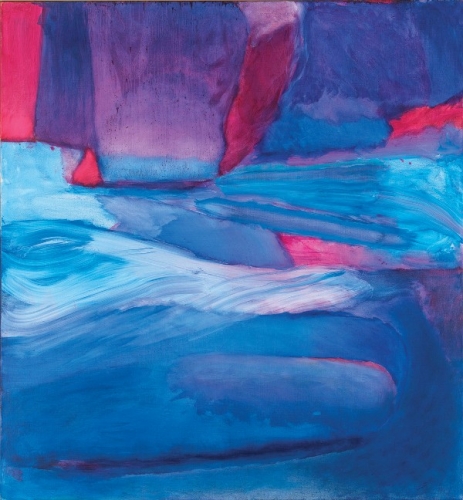 FOR AN ARTIST who emerged from the Sturm-und-Drang­ driven Abstract Expressionist movement of 1950s New York, Emily Mason's work is remarkably serene. This quality is not only apparent in the way vibrant swaths of oil paint harmonize with each other on the canvas; it also comes through in the way her career has quietly percolated along through the decades since, without drama or self-promotion, with no clearly delineated sty­ listic phases or periods. Mason, now 86, is still making new work the way she always has-by intuition, without any need for theo­ ries, without measuring herself against others.

A Mason painting is basically about color rather than line. Machu Picchu (2010) is at high temperature, with saturated oranges and yellows interpenetrating and seeming to give off waves of energy; in Aquifer (2010), we get a similar effect, but cool, all blues and pinkish purples engaged in a calm flowing back-and-forth, like a sea just past dusk. In many of her paintings, Mason plays with complementary colors: in Traces (2012), reds and oranges face off against blue-greens, sometimes slashing, sometimes undulating. She gets these effects by allowing the paints to interact with each other: “I work in terms of transparencies, flood one color on top of another,” she says. To do so, she uses thin paint, and starts with the canvas flat on the ground, then raises it up and turns it around, allowing gravity to do some of the work. “I never use acrylic,” she adds. “It dries too fast, and you can’t take it out. I want pentimenti. Oil paint is a two-way street.”

Line, for Mason, is almost beside the point. “I don’t like drawing,” she says. “I don’t like outlines. Lines are too much of barrier. To me, line is only meaningful if it’s in terms of mass.” In keeping with this approach, two colors that are hardly ever to be seen in a Mason painting are black and white. Rather than the Florentine school of the Renaissance, which stressed drawing (disegno) as the foundation of all art, including painting, Mason is in the Venetian tradition, which espoused color first and foremost. And that makes perfect sense, in light of the fact that early in her career, in 1956, she won a Fulbright grant to study in Venice. There she enrolled in the Accademia di Belle Arti, where her teacher was the Futurist-influenced abstract painter and printmaker Bruno Saetti. There, also, she married her husband, the painter Wolf Kahn, whom she had met earlier that year in New York. She cites Kahn, who, like her, is still very active as an artist, as “an important influence.”

Other artistic traditions, closer to home, went into the making of Emily Mason. Her mother, Alice Trumbull Mason, was an artist who studied with Arshile Gorky in the late 1920s and in 1936 became a founding member of American Abstract Artists, a group that included such eminent figures as Josef Albers, Ad Reinhardt, Piet Mondrian, and Burgoyne Diller. Through her mother (her father, a sea captain, was largely absent during her childhood), Emily Mason was exposed to the Bohemian art world of New York in the ’40s and early ’50s, and, more importantly, to the idea that a woman could be an achiever in a male-dominated art world. “She was a good role model,” Mason says. “I saw her as a strong woman who was a painter in very different times to be a woman painter.”

Alice Mason’s concepts of painting and printmaking were definitely more advanced than what her daughter was exposed to at New York’s High School of Music and Art. “At Music and Art,” Mason recalls, “they said, imagine, your mother is an abstract painter—they thought a painting should look like Ben Shahn.” One of Mason’s earliest paintings, from 1946, depicted her mother’s studio on 119th Street and Lexington Avenue in Harlem, a cavernous space with skylights in which, years earlier, the doors for the Cathedral of St. John the Divine had been cast.

Also on her family tree is John Trumbull (1756–1843), known for his paintings of American Revolutionary War battles and The Declaration of Independence, installed in the Rotunda of the U.S. Capitol. Mason doesn’t particularly admire him. “I think he was sort of a flake,” she says. “He jumped around in styles and was very influenced by the British art scene. My mother thought of herself as a pioneer, and I don’t think he thought of himself that way.”

After high school, Mason went to Bennington College in Vermont, where she found the art education less than satisfying. During the summer of 1952, though, she had a formative experience at the Haystack Mountain School of Crafts in Maine, when she heard the textile designer Jack Lenor Larsen lecture on his theory of “analogous color.” As she later recounted to the writer David Ebony, Larsen “hung skeins of brightly colored wool over long dowels suspended between chairs. The colors spanned the spectrum of primary, secondary, and tertiary colors. He explained analogous color theory as color modified not by black and white but by other close colors of the spectrum. For instance, one could have a yellow and warm it up with red or orange, or cool it down with blue and green. This experience has helped me throughout my painting career. It also enabled me to continuously discover how colors affect each other: a visual magic.”

Asked about it today, Mason de-emphasizes the power that any conceptual scheme could have over her work process: “Yes, analogous color is real, but I don’t think like that, in terms of systems—I just do. I try to get a conversation going between the colors. John Cage talked about getting the mind out of the way, of letting intuition work instead of preconceived ideas. If I can get rid of those ideas….”

Helping her get rid of them is the paint itself. When asked how her current work differs from her earlier work, she answers simply, “There’s real continuity, not departure. A new tube of paint—that’s a departure for me, something to get excited about. My work is really about color relations taking me to a place I haven’t yet been. It’s like opening doors.”