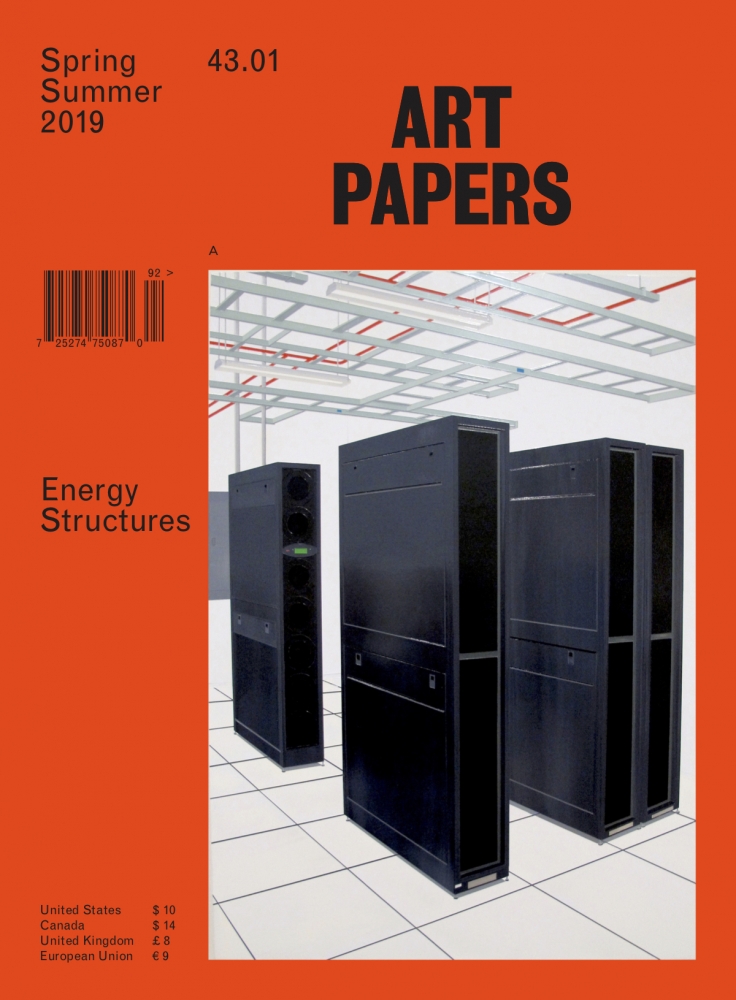 I am interested in intersections between technology and architecture, and the impact of communications media on society, culture, and historical events. I explore these intersections through contexts such as WikiLeaks, Edward Snowden, instances of hacking, digital warfare, software glitches at Nasdaq, the role of social media in recent revolutions and wars in the Middle East, and the fragility of the systems on which we depend. The collection, dissemination, and control of information are recurring subjects in my work, as are ideological mobilizations of space, infrastructure, and architecture.

This painting was made after I had the opportunity to tour one of the Markley Group’s “mission-critical data centers” located above a Macy’s department store in Boston, MA. I found the modernist, minimal design of the server, which recalls that of a bookshelf, interesting in its connections with the server’s function as a conduit for information.

These paintings depict an Amazon fulfillment center, but they might easily be mistaken for the shelves in a public library. It is unnerving to consider the possibility of commercial warehouses as contemporary or future alternatives to libraries— places where history, art, and science are amassed for public consumption. Amazon Books (After) imagines a ransacked book section of an Amazon warehouse. I was inspired to make this work after reading about the destruction of Timbuktu’s library by Malian rebels in 2013.

The Large Hadron Collider was built between 1998 and 2008 through the collaborative efforts of 10,000 scientists from more than 100 countries. This immense project made possible experiments proving the existence of the formerly theoretical Higgs boson (also known as the “God particle”). The Large Hadron Collider has huge challenges—it breaks, has to be retooled for the next experiment, and is extremely expensive. Advances in technology and science mean that a time is likely to come when the collider will be obsolete. One day it will be an archeological site. I was drawn to the immensity of the project, the scientific importance of CERN, and how the machine and its infrastructure will age and be seen and understood in the future.

Television towers were constructed during the post–World War II era, and those that remain now stand as contemporary ruins of an obsolete technology. The BT Tower in Birmingham, UK, was erected in the 1960s. Although it houses smaller, still-functional aerial satellite dishes, it is primarily a relic to obsolescence that serves as a local landmark.

This painting is based on a photograph, of a residential neighborhood in Aleppo, Syria, shot before the Syrian Civil War. The date in the title refers to the day the war in Syria officially started. This painting is about the memory of a city—the satellite dishes are, in a sense, symbolic of past, destroyed lives—but also serve as reminders of everyday life before the war.

I am interested in the staging of spectacles and stadiums’ ability to serve as political propaganda tools. The arena in the painting is viewed as a symbol of national cohesion and strength through large-scale, state sponsored sporting events—a practice often taken to extremes by authoritarian governments. The viewing platform reserved for the political leadership is the center point of the painting. The source photograph—which I appropriated from an architectural guide book to Pyongyang, one incorporating images supplied by the DPRK—originally included portraits of heads of state and political propaganda slogans in the space. By editing them out, I show the stadium in the future, in a politically changed climate.

Amazon seeks to achieve global dominance in the consumer marketplace and is making great strides to get there. The company began with books, and this painting depicts a small section of an enormous modern Amazon fulfillment center. The history of the illustrated manuscript, the printing press, libraries, and archives all appear in this image of super-sized commercial activity. Despite the trend of print to digital, we continue to apply a special nostalgia upon the physical form of print.