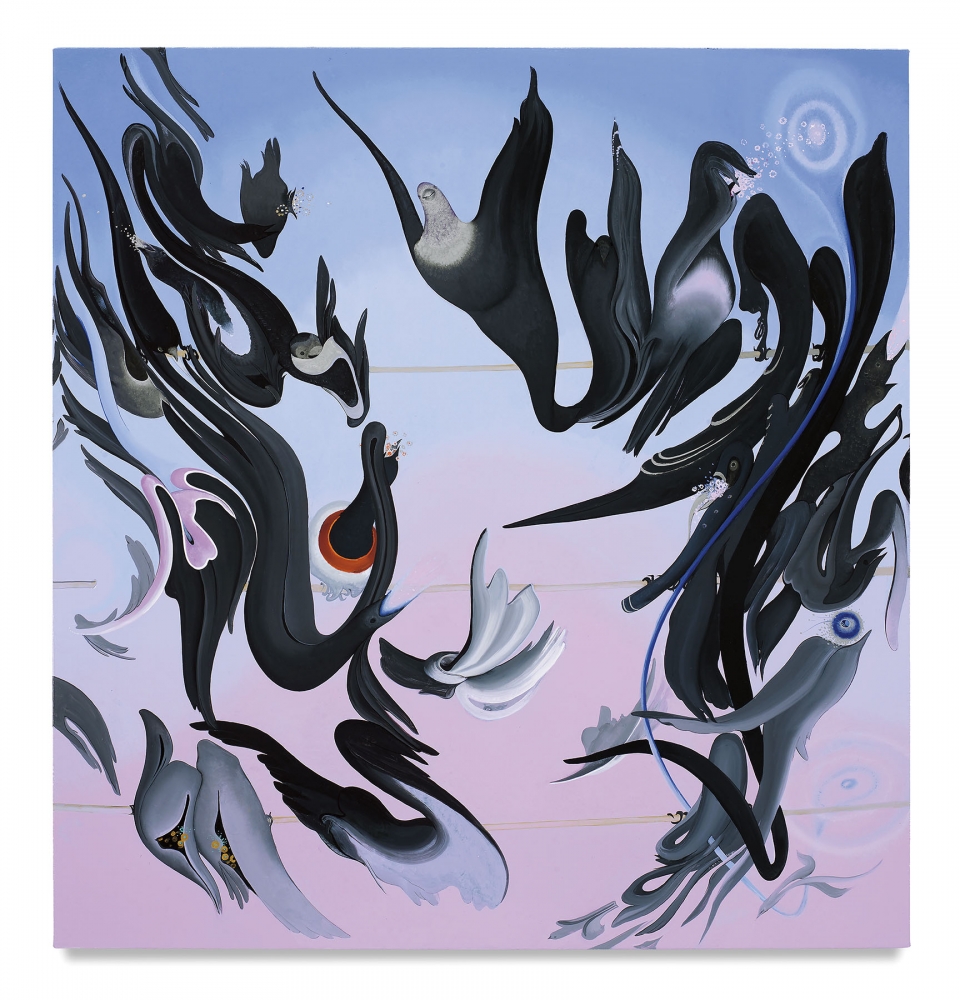 Essenhigh reveals a freedom that resonates with all manner of fusion: of figure and design, of abstraction and narrative, of sentiment and humor, and more generally, of ambitious painting with a readable narrative.

I am as guilty as any art writer of relying too often on the phrase, “blurring the lines between abstraction and figuration” in reviewing the work of painters for whom abstraction is only one of the elements in their work. Its descriptive convenience is undeniable, but it tends to reduce a complex issue to an idle dichotomy. And more importantly, it fails to concede the obvious, which is that for many young artists, the option of blending abstraction with any sort of implied reference is no more troubling than choosing which socks to wear in the morning.

Inka Essenhigh — to suggest an artist who exemplifies this more open attitude — seems like many of her generation, immune to anxieties related to fusing abstraction with figuration. But her inaugural exhibition at Miles McEnerythis spring reveals an even greater level of freedom and invention, a freedom that resonates unapologetically with all manner of fusion: of figure and design, of abstraction and narrative, of sentiment and humor, and more generally a fusion of ambitious painting with a readable narrative.

Concerning the latter, Essenhigh’s full embrace of enchantment is significant. Apparently, she feels no compulsion to hedge her vision with edginess or intentionally disagreeable ballast, like the male-objectified ingenues in Lisa Yuskavage’s work that seem to ridicule a viewer’s attraction to the allure of her imaginative atmosphere. Essenhigh is comfortable sharing her sensibility, committing with no preconditions to the Romanticism of 19th century landscape painting and to later offshoots of the same, like the vines and swirls of Art Nouveau.

Her influences do not stop there. She reformulates the organic evocations of Surrealism with a nod to Max Ernst’s fantastical humanoids, minus the Freudian paranoia. But what a viewer may not immediately grasp is a connection to the late work of Arshile Gorky. The anthropomorphic dodging at play in the figure group sitting under a tree in “Treasure Hunt” (2017), recalls the hidden domestic arrangements Harry Rand proposed in his Gorky monograph, The Implication of Symbols (Allanheld & Schram, 1981), with the significant difference that her narratives are overtly decipherable.

The composition of “Treasure Hunt” centers around a diagonal path followed by three figures twisting and flowing like exotic sea creatures. The foremost of the three pulls a wheeled suitcase behind her, providing the only literal clue we’re given beyond her generally human shape and animated stride. I found the arrangement intriguingly similar to Breugel’s “The Harvesters”(1565) in its general program of figures on a narrow path with a group resting below a tree in the foreground. Aside from this highly speculative and perhaps frivolous reading, the narrative in “Treasure Hunt” remains vaguely thematic. On the other hand, “Girls Night Out” (2017), creates an easily construed dramatic tension. Three females in club wear recoil playfully from a gaseous green cloud slithering up to them, a phallic offshoot rising above its otherwise ground-clinging trajectory. Suitor or predator, one may ask — a question vaguely answered in the form of a reptilian figure resembling a toy dinosaur floating within the greenish haze. It is a genuinely funny touch.

Her most engaging pictures are the landscapes, several of which consist of bare trees silhouetted against a white fog. At almost nine feet in length, “Forest Tableau” (2017) consists of five trees choreographed to behave like sentient beings. The figure on the extreme right is the most tree-like in appearance and treatment, as it is cropped by the frame’s edge. As one reads from right to left, the next two trees flap and flail at each other like children in the back seat of a car. To the left of that pair is an older thicker trunk that bends to the ground, apparently re-rooting (a common occurrence with certain species) while the last of the five extends its lower branches as if attending to its bent companion.

Several characteristics define Essenhigh’s trees, particularly tree branches. She not only imbues them with that gradual taper that gives most plant life its Fibonacci orchestrations, she simultaneously reconfigures them like tentacles capable of communicating, not by feel but by gesture. Returning to the tree on the extreme left of “Forest Tableau”, two branches that one expects to be cropped by the frame, bend 180 degrees back into the drama, an adjustment reminiscent of more subtle instances made by the figures in Matisse’s “Dance” (1909), who twist their bodies and bow their heads to fit into the artist’s rectangle.

Narrative is a popular genre among painters today. Yet many practitioners — Peter Williams, Dana Schutz, Neo Rauch, to name a few of the major ones — maintain the narrative form within a methodology of abstraction. They indulge in a brand of improvisational image glut that clings to the spontaneous and often arbitrary devices of abstract painting, leaving thematic threads dangling in a fog of blurred ideas. What separates Essenhigh from these painters is her willingness to embrace the implications of her narratives and to share her dramatic intuitions openly with the viewer, without abandoning the improvisational spontaneity of her drawing and painting. It makes for a more substantial fusion of abstraction and figuration.