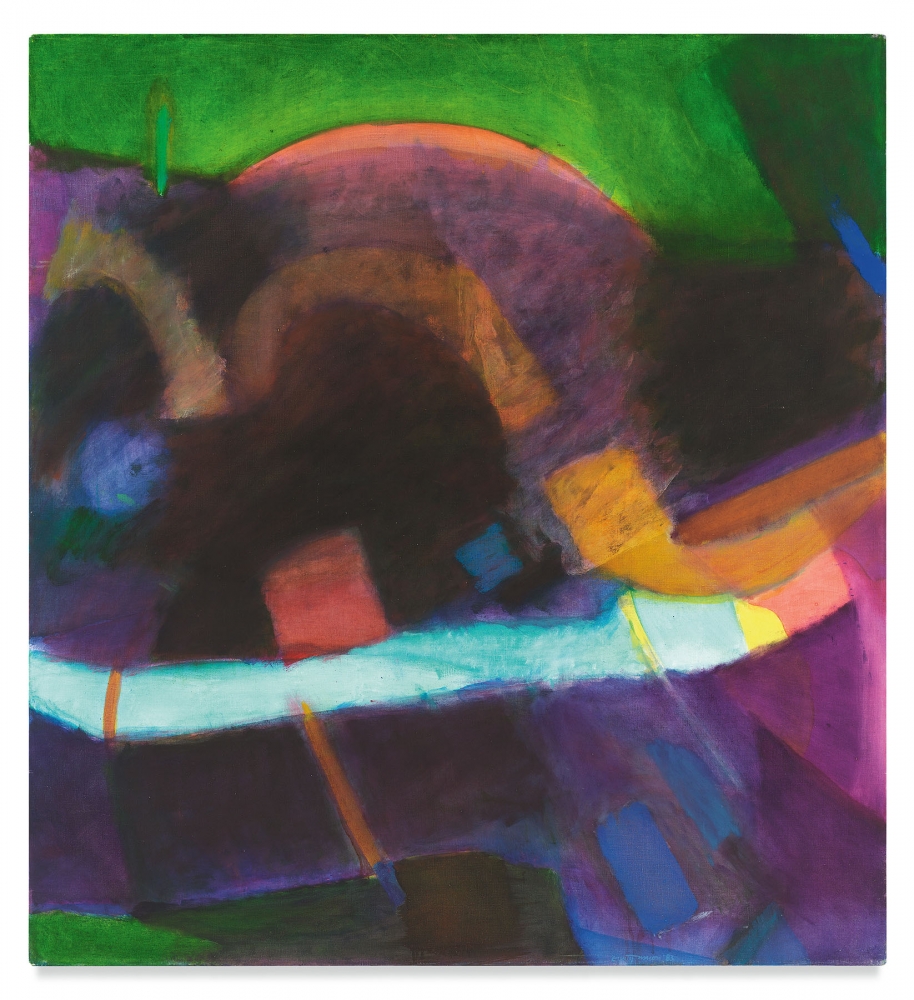 Even the most resolutely abstract artworks have a powerful associative capacity that allows the ascription of various real-world referents, a process akin to looking up at the clouds. Viewers might claim to see a butterfly alight in Lynda Benglis’s chicken-wire reliefs, for instance, or sunrise seascapes in Frank Bowling’s electric paintings. In looking at the canvases of Emily Mason now on view at Miles McEnery, however, we sense not so much a relation to a certain place or thing, but a lifetime of visual experiences put down onto canvas through a keen process of filtering, something like Joan Mitchell’s translation of the gardens of Vétheuil in her soaring panels of the 1970s and ’80s. The result in Mason’s work is necessarily nonspecific yet points nonetheless toward layers of feeling: light reflected off a rippling canal, a gleaming gold surface, flowers in mid-summer. She achieves this by building up literal layers of thin oil paint in explosive yellows, fiery oranges, and lapis lazuli blues, applying them to primed canvases with brushes and by pouring, and sometimes scraping them away with rags only to build them up again.

The canvases in Mason’s current show span the decade from 1978 to 1988, a period coincident with the artist’s 1979 move from her Broadway studio, shared with her husband Wolf Kahn, to a larger solo space on 20th Street in Chelsea. Work from 1958 to 1968 is concurrently on view at the Bruce Museum, while Weber Fine Art is showing oils on canvas from 1962 to 1989. The paintings executed in Chelsea are big (most are around four by four feet) and display the confidence of an artist working at full tilt. Here we frequently encounter marginally asymmetrical, softly geometric forms in a single color—washy turquoise, purple-brown, watermelon-magenta—placed at the center of a canvas, secured within a frame of translucent, rainbow-hued passages. Gently arcing horizontal registers bend through other colors: witness the green stripe at the bottom of Within the Orchard (1986) that emerges, stripped down to teal, from an obliquely-placed yellow shard. Sonia Delaunay’s prisms and Helen Frankenthaler’s stains would seem germane at first glance, but the paintings actually thwart the ascription of any secure art historical lineage precisely because Mason was well enough versed in painting’s history that its sublimation exceeds case-by-case comparison. The daughter of pioneer abstractionist Alice Trumbull Mason, a founding member and erstwhile president of the American Abstract Artists group, Mason grew up in the company of artists and was well versed from an early age in the language of abstraction, on one occasion defending her mother’s geometric compositions to her young friends. Later, a Fulbright fellowship to Venice inaugurated a lifelong affinity for European art, from Byzantine mosaics to Cézanne.

Mason’s paintings accommodate the external world not only in their relation to nature but in their consummate openness to others. Though her belief that “when you look at a painting you re-create the painting experience itself” echoes Abstract Expressionism’s emphasis on paint as the trace of an individual encounter, a painting by Mason is more like a perceptual offering to the beholder than a record of process or irretrievable action. The Green In Go (1983), for instance, equally suggests the glimmer of stained glass and the rolling contours of the countryside, opening our experience of the painted thing to our own sensory associations, both material and immaterial, natural and human-made. Sustained until her recent passing in 2019, Mason’s commitment to abstraction outlasted its zenith in the ’50s, its waning popularity in the face of ascendant conceptualism and figuration, and its recent re-emergence as a space for critical interrogation of identity. All this recommends the visibility she is now achieving, something she fought for on behalf of her mother, but forewent for herself during her lifetime.