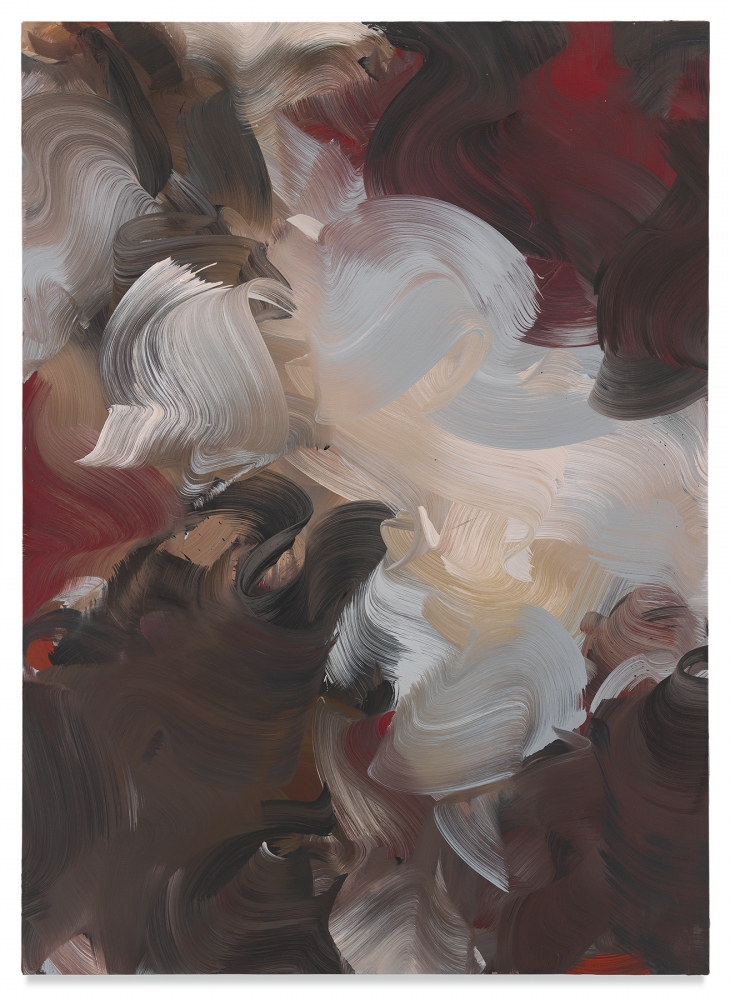 Erin Lawlor’s paintings, on view at Miles McEnery Gallery through August 16, have a sense of the familiar. Wide brush strokes play off one another, conjuring winding ribbons, rendered systematically like blood flowing to and from the heart — an ebb and flow of the most critical kind. At first glance, the deep rich color drew me in, then the scale, then the whimsy that radiates from the wide, curvy mark-making. But then, as I moved through the gallery with more focus, Lawlor’s paintings evoked a sense of observing the art of an earlier time: the natural integration of motion, body, and presence.

Lawlor’s morning rises (2018) is resonant of The Swing(1767), by Jean-Honoré Fragonard. Fragonard painted The Swing during the Rococo movement, when artists worked to produce decorative and detailed work, often frivolous. Lawlor’s painting, like Fragonard’s, conjures an age of lush decadence. But her process is far more time-sensitive than that of the Rococo painters, whose slow, deliberate modality did not produce the kinetic gestural effects that Lawlor does. As the paint starts to dry, her freedom of action diminishes. Placing her canvas on the floor and brushes within arm’s reach of the surface enables her to make marks quickly, impulsively, and energetically. But while the appearance of movement is manifest in her work, she also establishes clear planes of depth and firm control.

Intentionally or not, the composition and mood of Fragonard’s painting are observable in Lawlor’s piece. The light blue tones in the center of the painting stake out a clearing, where the woman and the swing pendulate. In the bottom left corner, containing mixtures of black and reds, her lover would extend his arm, gazing at his beloved. In this expressively and gesturally abstract manner, Lawlor’s color, marks, and movement vividly communicate what only a representational painting could in the past. Other historical nods can be seen in her use of triptychs and diptychs. More broadly, Lawlor’s paintings function as maps that might lead to the source of a message.

Her triptych night garden/flight (2018) constitutes a heavy emotional presence within the gallery space. Each panel has a specific focal point: left side – red; middle – black; right side – black. I think most immediately of Hieronymus Bosch’s The Garden of Earthly Delights. Lawlor has the subtle ability to summon memory and history, while affording the paintings themselves their own character through size, medium, and process. Although long spans of time separate Lawlor from artists such as Bosch and Fragonard, and the specific intent and context of their respective works obviously differ, she has illuminated the bands of aesthetic memory that they all occupy.