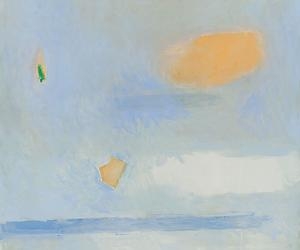 Three recent exhibitions in the New York area offered an opportunity to assess the career of the late Spanish-born Abstract Expressionist Esteban Vicente (1903-2001). Focusing variously on his paintings, his collages and his role as a mentor and teacher at the New York Studio School, these shows constituted a survey of his wide-ranging practice over the course of nearly 50 years. Vicente first gained prominence with the emergence of the New York School during the early 1950s, and his colorful, atmospheric paintings often resemble works by others of his generation, particularly Mark Rothko’s “multiforms” and Philip Guston’s “Abstract Impressionist” canvases. His compositions, however, frequently display a refinement that sets them apart from the coarser, and more challenging, works of his contemporaries. This contrast was readily visible at the Parrish Art Museum on Long Island, where a small retrospective of his paintings appeared alongside a selection of pieces by artists including Jackson Pollock, Alfonso Ossorio and Robert Motherwell, as well as Vicente’s former students Chuck Close and Dorothea Rockburne, among others.

Critics have often noted that his collages rank among his highest achievements, and few of the works at the Parrish or the late paintings at Ameringer McEnery Yohe in Chelsea compare with collages or the small collection of assemblages that appeared at New York University’s Grey Art Gallery under the exhibition title “Concrete Improvisations.” Like Lee Krasner, Conrad Marca-Relli and other Abstract Expressionist collagists, Vicente typically avoided newsprint and magazine pages in favor of combining oil paint and artist papers, and the resulting works usually resemble painting more than they do collage. He would often trace the ragged cut or torn edges of paper with his brush, and he frequently adjusted his colors to match adjacent swaths of paper. In many of these works, it is difficult to discern where paint stops and collage begins. As he once remarked, “I will never do a collage the way Schwitters did using different materials…Because to me that has nothing to do with painting.”

The physicality of the medium nevertheless often tempered his penchant for airy lyricism, and his selection of colors usually departed from typical decorator’s palette of salmons, lemon yellows and sage greens. In a notable pair of works from 1956, he actually overcame his distaste for Schwitter’s approach and affixed bits of cardboard cartons and labels from bottles and cans alongside the compositions’ more traditional art materials (colored paper, gouache). He glued them right-side-up and clustered them near the center of the composition like advertisements. In Labels, for example, a package for Octagon soap appears above a Campbell’s tomato soup wrapper and just next to a box of Diamond matches. Although he quickly abandoned these Neo-Dada experiments to the likes of Robert Rauschenberg and Bruce Conner, these pieces, like so many of his collages, mark a compelling departure from the facility and the finesse so typical of his Abstract Expressionist paintings.