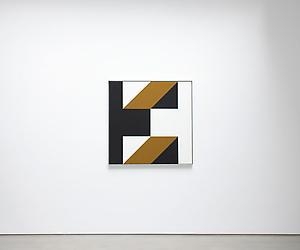 The hard-edge abstractions of the painter Frederick Hammersley (1919-2009), who began his career in Los Angeles and later moved to New Mexico, have never enjoyed much of a New York presence. They were last seen in bulk here in a two-person exhibition at Artists Space in 1987, a year after the artist’s only New York gallery show and more than 20 years after his rare inclusion in a New York museum show: the Op-Art-centric “Responsive Eye” exhibition at the Museum of Modern Art in 1965.

The two groups of works here suggest an artist always slightly out of step with his time but very assured of his own sensibility. The gallery’s larger space holds boldly distilled geometric paintings from the 1970s, when Mr. Hammersley was clearly pushing beyond the simplified geometries of John McLaughlin, a West Coast artist 20 years his senior, with strong colors, a hard, shiny surface and a penchant for stark diagonals and sudden spacial shifts that pack considerable punch. The second space is devoted to the smaller, more organic abstractions that Hammersley made starting in the mid-1980s. Still somewhat hard edged, and even more sharp colored, these works coil the forms of the earlier works into something more personal. Their curving and protruding shapes interlock like puzzles; their taut compositions are further compressed by distinctively notched and stained wood frames of the artist’s making. Sharing common ground with several contemporary New York painters, including Thomas Nozkowski, Andrew Masullo and Carrie Moyer, these works feel, suddenly, very much of the moment.