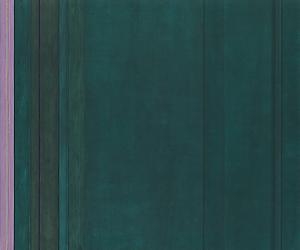 Made between 1961 and 1985, the eight enormous acrylic-on-canvas paintings by Gene Davis in this show - all composed of vertical bands and stripes - testify to the artist's devotion to color. "To understand what my painting is all about," Davis once said, "look at my painting in terms of individual colors...select[ing] a specific color such as yellow or a lime green, and take the time to see how it operates across the painting." When one looks at Yellow Jacket, 1969, one notices yellow used in a variety of ways: On the right, narrow vertical lines of yellow are tightly interspersed with orange lines; on the left, blue and pink stripes are sandwiched between relatively wide bands of lemon; and in roughly the center, medium-size gold stripes emerge from within a broad swath of lime green. The result is a dazzling irregularity - the yellow takes on a variety of qualities, multiple personalities. Larger, toneless vertical lines on either side contain the painting more or less in half. The work's eccentric yet reasoned structure, coupled with the colors' various tones and intensities, makes for an ingeniously polyphonic musical painting.

Symmetry is particularly important in Mirror, 1977. On the left-hand side of the bare canvas, Davis has painted thin vertical lines in a variety of colors, all seemingly executed freehand - they are uniquely irregular among the works here - while the deep-navy lines on the right are extremely precise, as if made with a ruler.

In 1911, Kandinsky spoke of "the strife of colors, the sense of balance we have lost...[A]ntithesis and contradictions...make up our harmony," and Delaunay, in 1912, writing about "pure painting," declared that "the simultaneity of colors through simultaneous contrasts...is the only reality one can construct through painting." Davis's stripe paintings are an exemplary, climactic statement of this point of view - he embraces a disagreement among colors. But what makes Davis's work seriously interesting is its "moodiness" and grandeur, more broadly its investment in a reality beyond that of the painting. Thus Queen's Gate, 1980, with its central area of regal purple, has a gracious presence. The luminous Monsoon, 1973, conveys one kind of emotional weather, the darkish green of Mark Twain (Shark Gate), 1972, another. Kandinsky, writing about what he called "the 'mood' of the work, lies the possibility of seeing...something less physical" - that is, "the emotion of the artist's soul" and his "finer experiences." It is the idiosyncrasy of Davis's paintings - the sense that they have personality, that they are deeply emotional, however impersonally they were constructed - that saves them from elegant sterility.