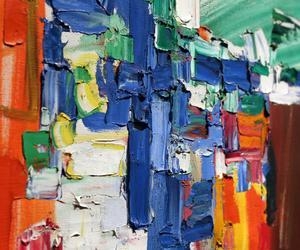 GREENWICH, Conn. — You have to love Hans Hofmann for his exuberant late-blooming paintings, and for his eponymous art school, which formed one of the foundations of Abstract Expressionism. His paintings are, fittingly, usually seen as part of that heroic art movement, even though they replace its existential undercurrents with a stylistic capriciousness that sifts through European modernism with abandon.

Reflecting his energetic, optimistic personality, Hofmann’s paintings have an easy openness with which they reveal and revel in the formal mechanics of modern picture making. The obvious butting of opposites — especially flat geometric planes of brilliant from-the-tube color and flourishes of automatist brushwork — might almost be termed Abstraction for Dummies, were it not so visibly intelligent. Still, Hofmann, who was born in Germany in 1880 and died in New York in 1966, left a complex, slippery achievement often overshadowed by his stature as a teacher, and these days his name rarely figures in the first rank of Abstract Expressionism.

Walls of Color: The Murals of Hans Hofmann,” a small but substantial exhibition at the Bruce Museum of Arts and Science here, gives us a new handle on Hofmann. Examining his little-known forays into mosaic in the 1950s, it is like a spotlight that illuminates all around it, specifically his last decade, when he wrestled his opposing stylistic elements into their finest expression.

Hofmann came by his broad modernist reach through firsthand experience. By 1904, he was in Paris, where he got to know Picasso, Braque, Matisse and Robert Delaunay — all roughly his age — before they were struck by fame. Fauvism was just heating up, Cubism was close behind, and these movements’ innovations, one based on uninhibited color, the other on exposed infrastructure, became the basis of Hofmann’s teaching and his art.

He first came to the United States in 1930 to teach at Berkeley, riding on the reputation of the art school he had established in Munich in 1915. With German politics darkening, he stopped in New York in 1932 and stayed, opening his school the next year.

Hofmann’s teaching distracted him from serious art-making for nearly two decades, especially since his New York school had a Provincetown, Mass., branch that occupied his summers. He would close his school in 1958 to concentrate on art. But by the mid-1930s, he had taken up drawing and painting again, making marvelous freehand sketches of the towns and dunes of Cape Cod that rallied reality toward automatist abstraction. His paintings combined outlines of terrain and architecture scribbled on smeary backgrounds, mixing the lightness and speed of Raoul Dufy with something more aggressive: Action Painting before the term was coined.

The Bruce show focuses on four commissions for mosaics that Hofmann received or considered in the 1950s. Only two were finally executed and are luckily still intact in Manhattan. One is public and at the moment not well maintained: the ground level exterior wall of the New York School of Printing (now the High School of Graphic Communications Arts) at 439 West 49th Street. The other covers the four sides of an elevator bank in the lobby of 711 Third Avenue, between 44th and 45th Streets, a building designed by the Swiss-born New York architect William Lescaze in 1954. It is in impeccable condition, but since Sept. 11, it has been most visible to people who work in the building.

Walls of Color” has been organized by Kenneth E. Silver, a professor of modern art at New York University and an adjunct curator at the Bruce, which is a short train ride from Manhattan and a very brief stroll from the town’s Metro-North station. The show has limited space, but Mr. Silver has counterintuitively placed in its midst a roughly half-scale re-creation of the 711 elevator bank, papered with a full-color digital image of the mosaic. It almost literally jostles visitors. But that doesn’t stop the work from detonating in mind and eye. Mr. Silver has assembled about 30 studies on paper and canvas, along with architectural plans and photographs, and a handful of late paintings.

As you move from one collision of modernist styles to another, it makes sense that the painter-sculptor Frank Stella has called Hofmann “the artist of the century,” who “produced more successful color explosions than any other artist.”

From the show’s first three paintings, Hofmann is all over the place, but with the constant of blasting red, yellow, blue and green vigorously applied with brush, palette knife or squeezed point tube and a distinct bravura. The subjects oscillate among popified Constructivist abstraction (“Awakening,” 1947), jumbled interior (“Studio in Blue, No. II,” 1954) and Cubist still life (“Opulence,” also 1954).

Inside the elevator bank model, a short video of Hofmann at work is worth watching. On audio, Mr. Silver presents his thinking on the mosaics. First, His studies for the mosaics led him away from easel painting and spurred larger, more ambitious works. This is visible in nine paintings (oil on paper on board) executed in preparation for a 50-foot-tall mural for a campanile in Chimbote, a port city in Peru, as part of a renewal project by the architect Josep Lluís Sert and the urban planner Paul Lester Wiener. Measuring as much as 8 by 4 feet, the studies depict tilting, implicitly Constructivist crosses in red, yellow and blue, so cheerful they seem almost blasphemous, and more open figurative-like improvisations that bring to mind David Smith’s welded sculptures.

Second, moving around big pieces of painted paper for the mock-up of the elevator bank mosaic led Hofmann to the signature motif of his late work: little floating planes of color, squares and rectangles of pure color locked together across the surface or isolated on fields of murkier colors. These elements, which exemplify his theory of spatial “push-pull,” are seen here in two charming all-red paintings (Mr. Silver rightly connects them to Matisse’s “Red Studio,” painted in 1911). The video shows Hofmann arranging the paper with assistants, bringing to mind images of Matisse working on his late cutouts at the same time.

The planes of color mutate into collage in studies for unrealized mosaics for an apartment building and in those for the School of Printing mosaic. In two of these, Hofmann adorns narrow horizontal boards with additional pieces of board, some monochromatic, some stained with flurries of watery brush strokes similar in style to that of Helen Frankenthaler, a former student, as if to indicate that we’ll never know what he might do next. The persistent objection to Hofmann was that his stylistic inconsistency implied a lack of core, which in a sense is true. His work is not deep or soulful, but completely unclouded. He loved and excelled at making paintings that actively and aggressively worked, by whatever stylistic means. In addition, it is to his advantage that now, thanks to polymorphous artists like Sigmar Polke and Albert Oehlen, consistency is no longer what it used to be.

Walls of Color: The Murals of Hans Hofmann” is on view through Sept. 6 at the Bruce Museum of Arts and Science, Greenwich, Conn; 203-869-0376, brucemuseum.org.