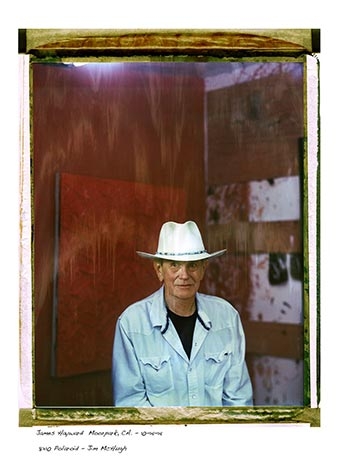 A few years back, Evan Maurer visited James Hayward at his farm in Moorpark, California, for a barbeque.

Maurer, a curious sort who was the Minneapolis Institute of Art’s director and president from 1988-2005 and a long-time friend of the artist, entered Hayward’s studio to check out some of his art – including a series Hayward had painted depicting the Stations of the Cross. The 14 pieces have never been shown in public.

Maurer told Hayward he had the perfect place to show them – Saint John’s University.

Maurer was well aware of SJU. He had given the 1998 Commencement address at SJU, had received an honorary Doctor of Humane Letters degree from the school that year and was a friend of former SJU President Dietrich Reinhart, OSB.

“I am 75 years old and have had a lot of lovely smoke blown up my nose; such is the nature of the art world,” Hayward wrote. “But the conversations continued and Evan told me of Saint John’s, the Illuminated Manuscript collection and the eight buildings on campus designed by Marcel Breuer.

“It did sound ideal. My Stations of the Cross had never exhibited. I did not see them in a commercial gallery space, no matter how fancy,” Hayward added. “To be honest, I had not thought that this would ever happen.”

But it did come to fruition at SJU, thanks to a generous gift by John and Lois Rogers.

Hayward’s exhibit, “Stations/Variations” which includes three works from his Variations on the Annunciation, runs from Oct. 15-Dec. 7 at the Alice R. Rogers and Target Galleries, located in the Saint John’s Art Center on campus as part of the Fine Arts Visual Series at the College of Saint Benedict and SJU. The exhibit is free and open to the public.

An artist’s reception is from 5-7 p.m. Saturday, Oct. 20, at the Rogers and Target Galleries.

“Hayward’s minimalist paintings are an excellent centerpiece to the backdrop of the Bauhaus architecture lining the Saint John’s campus,” said Jill Dubbeldee Kuhn, gallery manager. “This display will be absolutely stunning.”

When Hayward was a child, he served as an altar boy at Saint Charles Church in California. As such, he served at Sunday Mass, later serving the Stations of the Cross.

“Early on in my formal education, the Pasadena Museum of Modern Art had a show of Barnett Newman’s ‘Stations of the Cross.’ I went to see them and was both confused and disappointed,” Hayward wrote. “In my youth, I had frequently served the Stations of the Cross, at my local church. They were small, narrative reliefs, in gorgeous pastel colors.

“Newman’s Stations lacked all of this, save the title. They were large and looked like paintings – abstract and black and white, devoid of visual reference to their place along the Via Della Rosa. I began to wonder if one might evolve Stations that functioned both as liturgical referents and as pure abstract form.”

That was five decades ago. Hayward began to sketch out compositions he thought appropriate.

“I had decided on the icon triptych as my basic structure. Thus, the vertical lines were the same in all 14, but the horizontal lines varied, station to station,” Hayward said. “At once I realized the importance of color to help establish the specific narrative.”

Hayward has been evolving and nuancing these paintings “for decades.” The work has hung in his studio for almost 30 years.

“Over time, collectors have wanted to purchase this one or that one. This allowed me to realize that they did function as pure abstract form,” Hayward wrote. “But the 14 were part of one large painting.

“They have never been exhibited because I refused to allow these special efforts to be adulterated by the commercial gallery system. My youthful idealism demanded that they not be subject to the sordid fiscal manipulations of the art world. They hung in my studio, waiting patiently.”

That led to Maurer seeing the works at the barbeque, and knowing the perfect place to exhibit them - all of which makes Dubbeldee Kuhn quite delighted.

“I think it’s the excitement that he is presenting secular art in a very abstract way,” Dubbeldee Kuhn said. “It’s a new way to open our eyes at looking at something that is so familiar to many of us.

“I was surprised by the contrasts, of it being so minimalistic compared to the usual narrative,” she added. “It was that difference and the highly textured painterly quality that Hayward uses which creates a rich and intriguing outcome.”

Each of the 14 Stations of the Cross pieces measure 22 inches by 30 inches. The three Annunciation paintings are larger works: the Bellini painting is 7½ feet by just over 11 feet; the Botticelli Variation is almost 8 feet by 5 feet; and the Caravaggio painting is 9½ feet by 6½ feet.

The fact that Hayward is an extremely successful professional artist who is not interested in selling these paintings makes this a must-see exhibit, Dubbeldee Kuhn said.

“That, in itself, makes it an exceptional opportunity for us at Saint John’s to be able to honor his wishes and to have the privilege of showing work of his that has not been shown before,” she said.

The Alice R. Rogers and Target Galleries at the Saint John’s Art Center are open daily from noon to 6 p.m., and Thursdays from noon to 9 p.m.