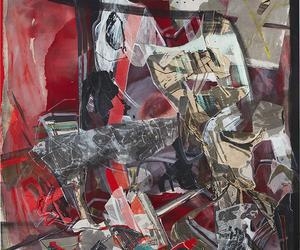 On view in the GAR Gallery

The story of Judith goes something like this: Judith -- a beautiful, wealthy, widow -- lives in the Jewish village of Bethulia, which is under attack by the Assyrian army, led by General Holofernes.  While the elders of the city are fretting about what to do, Judith berates them for being a bunch of cry-babies, then sneaks out of the village at night with her handmaiden and presents herself to the enemy camp.  She seduces Holofernes, gets him drunk, then slices off his head with his own sword.  She returns to her city a hero, never remarries, and basically lives out her days kicking ass and taking names. Judith has been all but written out of the major Western religious texts, and for the simple reason that no one likes a loud-mouthed broad with a sword. But the thing about loud-mouthed broads is you can never really get rid of them.  Shut one up, and an army of more pops up in her place.  And so it is with the story of Judith.  Try as we might, she just keeps popping up.  She was a particular favorite subject for painters during the Renaissance and Baroque periods. Painters like Artemisia Gentileschi - who painted all the dudes under the table. In 1611 she accused an older, married, and well-established friend of the family of raping her.  And she wouldn't shut up about it -- even after a trial that included a gynecological exam and torture via thumbscrews. After the trial, Artemisia continued to be a bad-ass painter, dedicated to depictions of strong women.  Her masterpiece is her blood-spurting depiction of Judith slaying Holofernes with his own sword.

The Reflection in the Sword of Holofernes is exactly as the name implies.  We kept thinking about the sword in Artemisia Gentileschi's famous painting.  One side of the sword reflects the violent act and its gore and blood -- the physical act, the hands of Judith and her attendant.  The other side of the blade reflects back on the woman who has committed herself to doing this brutal and brave task.  One can only imagine the introspection that has lead her to this place.

When Judith raises her weapon with the intention of slaying Holofernes there are a multitude of reflections in the blade, the sword becomes a prism of intention, simultaneously reflecting action and emotion.

The work in this show is what we see in the reflection: women looking intently at themselves, and women performing bold gestures.  They are brave and vulnerable, courageous and complex.

The Reflection in the Sword of Holofernes is a show about women as told through this ancient heroic narrative.  It is a show about painters committed to painting.  And it is about speaking your truth in the most direct way you know how.