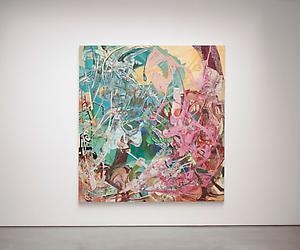 Iva Gueorguieva (b. 1974) generates a sense of frenetic activity in each of her expansive compositions. The 15 large-scale paintings at Ameringer McEnery Yohe and nine works on paper at Bravin Lee Programs constituted the Bulgarian-born, Los Angeles-based artist’s New York solo debut. Produced in the past two years, the works feature flying trajectories and curving eruptions of line and color that create a sense of depth and movement. Her spaces are as whirlpool-like and active as those of Julie Mehretu, but her cascading forms share the physicality of Matta’s fanciful paintings. With her deft handling of multiple techniques and distinctive use of color, Gueorguieva is consistent but not repetitive.

Close examination of the paintings reveals thin strips of linen, off-white or smudged with color, appliquéd to the surface; their crisp edges lend an additional graphic charge to each composition. In "Grown Child With Mother" (72 by 38 inches), these collaged bands appear, along with curving sections of stacked parallel brushstrokes and flourishes of red and brown, on top of a blue ground that evokes deep space. At the lower left, in various pale pinks, quirky, spindly shapes interact with rounded forms to suggest a pair of figures. Similarly, in other works, lively configurations of abstract shapes hint at figural groupings. Some of these, however, resemble machinelike robots rather than human figures.

Gueorguieva’s spatial gymnastics are more subdued in the large, collage-like works on paper. Most of these have an insistent materiality, assembled as they are from torn strips, sheets and scraps. The paper compositions also contain an impressive array of graphic markings, and in some works, holes in paper allow the exposed wall itself to serve as the composition’s ground. There is a recurring reference to babies and children in the titles—one work, for instance, is called "Man Having a Baby." In another example, amid a flurry of lines and ink washes of varying densities, the shape of a swollen form evokes a pregnant figure, repeated upright and upside down at the center of the field. In these works and in the canvases, the evocative imagery invites a certain intimacy that, despite the large scale and feverish surfaces, allows the viewer to connect on a personal level with this talented young painter’s vision. - Gerald McCarthy