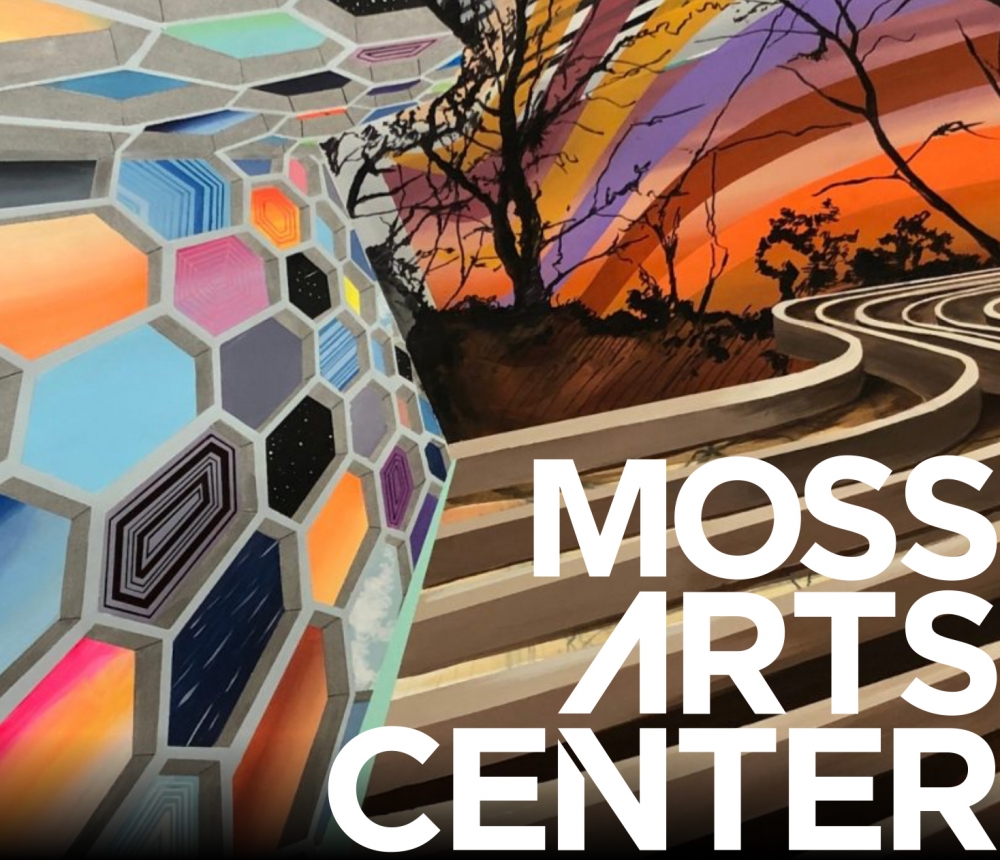 Join us as artist Jason Middlebrook takes us through the creative process behind Another World. Moderated by Margo Crutchfield, Curator at Large. Approximately 45 minutes. Pre-registration required, moderated Q&A.

The Moss Arts Center marks the reopening of its gallery spaces with a sweeping, panoramic work of art inspired by its own architectural elements. Another World is a site-specific commissioned work created by nationally acclaimed artist Jason Middlebrook.

Middlebrook envisioned, created, and digitally rendered this new 17-by-25 ½-foot work of art, which stretches across the gallery’s longest wall. Recognized for his complex and mesmerizing compositions, Middlebrook is best known for his “plank paintings”, geometrically-patterned paintings on planks of elm, maple, or other hardwoods that exist somewhere between painting and sculpture. He has also created a number of public art works ranging from mosaic wall works to large scale steel sculptures.

This two-dimensional wall work at the Moss provides a new conceptual direction for the artist. For Another World, Middlebrook merges his drawing and painting skill with digital processes on a grand scale. Middlebrook developed the work through numerous sketches, creating a 40 x 60-inch multi-colored drawing which was scanned, digitally rendered on Photo Tex, and mounted to the gallery wall.

“Another World presents a visual journey in a grand sweep through multiple perspectives, intersecting and colliding formations, and points of view,” said Margo Ann Crutchfield, Moss Arts Center’s curator-at-large. “The work’s imagery, inspired in part by the soaring architectural elements of the Moss Arts Center, is rooted in this world, though, sifted and transformed through the artist’s imagination. From one end to the other the imagery ventures beyond our immediately recognizable reality into another realm. It’s a complex, intriguing, and fluid landscape.”Middlebrook’s work has been shown throughout the United States with exhibitions at major museums including the New Museum, New York; the Whitney Museum of American Art, New York; and the Museum of Fine Arts, Boston. His work is in the collections of the Museum of Modern Art, New York; the Institute of Contemporary Art, Boston; the Museum of Contemporary Art, Chicago; and the Princeton University Art Museum.

The mural is on display in the center’s Ruth C. Horton Gallery, which is open on Wednesday-Friday, 10 a.m.–5 p.m., and Saturday, 10 a.m.–4 p.m. The center’s exhibitions and all related events are always free and open to the public. Find more information about our reopening procedures at artscenter.vt.edu.