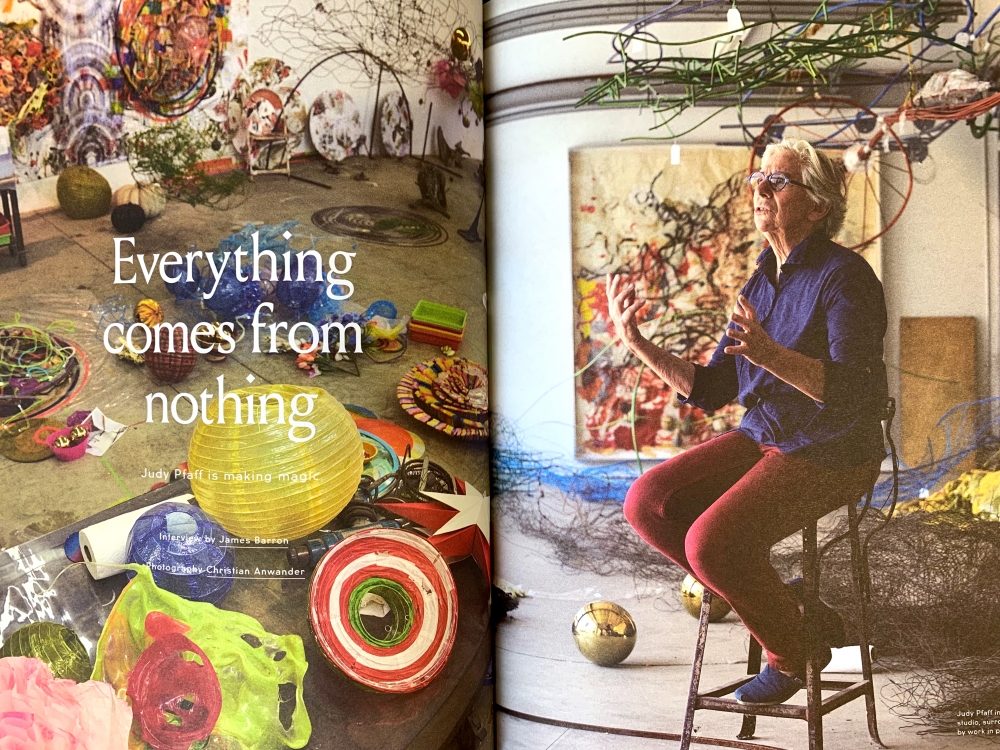 It was a crisp early autumn day that I drove to Judy Pfaff’s home and studios near Tivoli. She lives and works in a series of barns and outbuildings that still have the rough-and-tumble sense of a working fam, with areas that have the cool geometric feel of a setting for contemporary art. Upon hearing me near the door, two big dogs barked and wagged their tails at the same time, jumping all over me once the door opened. At seventy-two, Judy has the air of a woman at least fifteen years younger, and I’m immediately put at easy while she yells orders to her dogs but laughs as they continue to lurch toward me.

Though she’s won a MacArthur Foundation grant, Judy is a woman with absolutely no pretension. She has the sharply drawn lines of an artist who has persisted in her work for five decades, despite the wavering tastes of the art world.

James Barron I’m looking around your studio, and there are disparate materials everywhere. To some it might look like a junkyard. How do you know what to keep?

Judy Pfaff It’s funny, because some of my assistants want to throw everything away. I say to them, ‘No, don’t throw that away!’ I have stories for everything in my studio. When I’m in a quandary with a piece and don’t know where to go, I’ll walk outside and then return and see the answer right in front of me. I’ve always noticed that, if I need something, all I have to do is stop and look around and the answer has always been there.

JB But isn’t that the magic of making art, when the world speaks to you?

JP I think so. I like having a range of materials — something icky, something beautiful, something store-bought, something that just dropped out of a tree. When it has the right mix, maybe it’s like cooking or writing. One thing is what it is but paired with another thing it makes a story.

JB I know a collector whose cleaning woman threw away the newspaper inside a Beuys hat and ironed out a crumpled Beuys suit. He went completely ballistic. Do you like running the business of your studio?

JP If I get a feeling like there’s business being done, I run the other away. To me, there’s a romance about being an artist.

JB It’s about making the art.

JP Right. I think the world is changing. In the old days, Holly [Solomon] took care of me. She would take me shopping or out to dinner. She introduced me to Andy Warhol. It was a more organic relationship.

JB Aside from Frank Stella, who seems an obvious comparison, who are some of the artists you think about?

JP Kandinsky, Gaudi, Elizabeth Murray. When I first came to New York, the dancers that were around —Trisha Brown, Yvonne Rainer. It was very exciting and interdisciplinary. I thought it was always going to be that way.

JB Let’s talk about your work and Frank Stella’s.

JP You can see a Stella from a million miles away. My work gets fussier. He really nails whatever he’s after. This is probably a male kind of strength.

JB You’re describing Frank Stella’s work in terms of masculinity. Can you tell me about feminism in your work?

JP I think there is a nervousness in my work. It’s like a love affair with materials. I feel a need for certain things, like color, and I’ll just do anything to get the fragrance or the flavor right.

JB So Frank Stella is finding a solution and you’re, in a very feminine way, describing the problem. Do you owe some of your idea of femininity to your mother?

JP No. Right after I was born my mother emigrated first to Canada, then to Detroit. The war had just ended and London was a mess. She was quite young, my brother was born during the war and then I came along…I think she was overwhelmed with the devastation and the fear that she would have more children, because my father was Irish and a devout Catholic. She was not the motherly type. We were reunited in Detroit when I was 12 or 13. We didn’t get on…oil and water. I never really lived at home and I was married at 16. The most time we ever spent together was when she was in her 80’s and she was very sick, in California. I was with her when she died. Being with her during that time helped me to understand her and that helped me come to terms with all my questions.

JB Do you feel that an aspect of your work is a search for a mother?

JP I wouldn’t think so. I hardly know what that means…mothers, fathers, family. I don’t dwell on it. Mostly I think about surviving and have always tried to fend for myself.

JB I wonder, though, if this is partly accountable for what I see as the courage in your work. You’re an artist who is not afraid of using ugly colors or materials.

JP Except to me they’re nice colors. I don’t think about beauty. I think about juxtapositions and color relationships that accelerate each element, so it becomes vibrant. “Beauty” is an elusive word to me. If something was just beautiful, I couldn’t abide by that.

JB There’s an interesting quality that I see in the greenhouses that connect your studios. I see an equal amount of decay and growth.

JP That’s probably true. I do look for living and dying in all things; I need them both.

JB There’s a word I think of when I look at your work: eutrophication. It’s a process, such as when algae dies and filters down through the water and it forms the muck at the bottom of a pond, which then creates the growth the next year.

JP Lotuses are like that. A lotus flower is extraordinarily beautiful. It comes from the darkest muck of a pond and it shoots all the way up, and when it hits the light, it becomes…perfect.

JP True. When I’m dead, I hope these studio barns can become a foundation. It’s a lot to grapple with. What am I going to do with all this art after I’m gone? My friend keep dying and I get really upset. So I’m not sure how relaxed I am about death.

JB Do you ever get scared in the process of your work, when it becomes unwieldly and gargantuan, as if it’s moving on its own?

JP Yeah, but I also like that. I don’t think anyone believes this, but I’m actually quite controlling. Going into the blank box is hard for me because I can’t pull a story out of it. If I have a space that has something in it, I can riff.

JB If there’s a Chinese lamp that’s made out of paper and bamboo, do you have an association?

JP Sure. Maybe because of my upbringing — there was no house, there was no home — most of the time, I dreamt of traveling. In New York, going to Chinatown is always like my vacation. It’s like going to another world. I love its texture. And I don’t know if you notice, but there’s a lot of shit in those places.

JP Also if you go to a church, I think it’s ecstatic. I think that’s what I’m looking for. But churches are fucking scary, too.

JB Especially if there’s a nun sweeping the floor. Is there a moment you know you’re done with a piece?

JP Yeah, but sometimes I’ll think…’Well, that’s enough,’ and then I’ll come back, see it again and think, ‘No, that’s not enough.’

JB Did you ever have a moment when a critic or a review knocked you on your butt and you had to get back up?

JP Oh my God, I don’t think critics have a clue what they can do to an artist when they write those things.

JB Has there ever been any sort of illness that has prompted a new series of work?

JP No. Never been sick.

JP People have said that.

JB So in your home you’re using tiles and when you run out you start with another material, such as rough lumber. That seems to be the opposite of the white cube of a typical gallery.

JP Right. I always think that galleries actually look the most beautiful when there’s nothing in them, just white shapes. When you start putting things in them, they lose that; now you’ve got to do something equally strong.

JB Some of your titles come from Emily Dickinson. How does her poetry touch you?

JP I like that she was a lonely, observant person that was so poor. Between Jorge Luis Borges and Emily Dickinson, I’m a goner. One is very surreal and strange, and the other is just the gentlest. And one day I want to look at my garden and feel what she felt or see what she saw.

JB If someone uses the word “garish” to describe your work, what would you think?

JP “Garish” feels like a thoughtless adjective. There’s something nasty in that word.

JB That gets back to what we were talking about at the beginning. There’s ugly, and then there’s a twist on ugliness, and part of your job is to take something that’s “ugly” and turn it into something else.

JP Yes. You know when children — I don’t have children, so I’m making this up — when they’re playing in the dirt, and all of a sudden they see a worm or a bug or a mold or a larva, and all those things are probably kind of ugly, I guess, but once you recognize that it’s all alive and has a function… Well, something that was blank is now not blank; it has all these surprises in it. I don’t think I would ever use “garish.”

JB Did you have a feeling like that when you were a child?

JB Even though there are a lot of urban elements in your work, it seems to me that you need the landscape and the country.

JP Well, now I do. But when I lived in New York City I thought my work was quite urban. Then, when I moved to Brooklyn, it got a little suburban. And when I first came upstate I lived in a tugboat factory and I swear the work got almost Zen-like. And I was just watching the river go by. So here, now, in that greenhouse, occasionally I’ll think, ‘Well, it’s time to clear out all those dead leaves.’ And then I got this inventory of these dead leaves that curl in a very particular way. That particular shape reminds me of a philodendron, this thing that has a particular beauty, dead or alive.