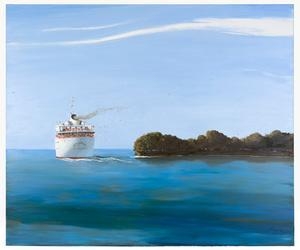 Wednesday was the day for the privileged few — relatively speaking — at Art Basel Miami Beach.

The fair thinned the crowd this year by limiting the guest list. “It’s been lovely,” Palm Beach collector Dale Anderson said about three hours into the preview. “I don’t think it’s frenetic.” As for the art, “I’ve seen some very interesting things, but the prices. They seem to have added zeroes,” she said.

Collector Beth Rudin DeWoody found a lot to like at the fair, including Richard Avedon’s 1960s portraits of The Beatles at Howard Greenberg Gallery and a Mickalene Thomas room installation honoring the artist’s late mother at Kavi Gupta Gallery.

The fair’s 267 dealers put their best foot forward for the show. P.P.O.W. Gallery is exhibiting works by Martin Wong and David Wojnarowicz, influential artists who were active in New York’s East Village in the 1970s and 1980s. The artists, who died of AIDS in the 1990s, were known for their collaborations.

We had all this great material,” said Wendy Olsoff, one of the gallery owners. “We did a huge amount of research to do this presentation.”

Among the works is Wojnarowicz’s “Sex Series,” a raw commentary on the AIDS epidemic consisting of X-ray-like photographs of bridges, trains and other threatening imagery dotted with bubbles of couples engaged in sex. The Whitney Museum of American Art plans a retrospective of his work in 2016.

Ameringer McEnery Yohe is showing dream-like narrative paintings by Miami-based Julio Larraz. The paintings of ships, fortresses, and sheer white cliffs falling into aquamarine seas are influenced by his Caribbean heritage. The artist’s family fled Cuba in 1961, when he was 16.

The newly added Survey section, dedicated to art historical presentations, includes a display at Galerie Georges-Philippe and Nathalie Vallois of the Tirs — or shooting paintings — of Niki de Saint Phalle.

In 1961, the artist hit upon the idea of stuffing her assemblages with bags of paint and inviting people to shoot them with a rifle, splattering paint across the surfaces. You can still see bullet holes in the pieces. The interactive element launched the artist’s international career.

Most people know her colorful nanas (large-scale sculptures of goddess-women) but don’t know these works, which are the most important,” gallerist Le Metayer Marianne said.

The Survey section also features a work that isn’t technically historical. Alison Knowles’ The Boat Book, at James Fuentes, was made for the fair. It continues the human-scale Book Project she began in 1966.

The work’s “pages” consist of big wood frames mounted on casters. Viewers step between them to find snapshots of sailors, newspaper clippings related to boats and the sea, a rusty anchor, a weathered oar, a small galley, a curtain decorated with a photograph of a man using a sextant and other nautical references. Sounds, such as surf and whale calls, add to the sensation of being waterborne.

The artist was one of the founding members of the Fluxus movement of the 1960s and 1970s, which challenged the definition of art as objects.

With 267 galleries there’s a lot to see. But that’s not all that you can get hung up on. “We’ve been here since 11 a.m. and we haven’t seen hardly anything,” Palm Beach collector Irene Karp said at around 3 p.m. “We keep running into people from Palm Beach. It’s like going to Publix.”

The fair continues through Sunday at the Palm Beach County Convention Center.