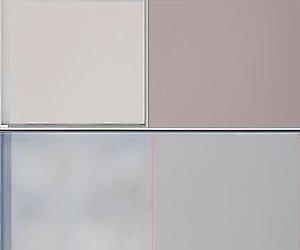 Patrick Wilson is on a self-professed quest for beauty in the realm of color and form. His search takes him back to 20th-century abstract colorists and reaches forward into contemporary, technology-dominated, urban life. Such rigorous study of color relationships, careful observation of artificial and natural light, and references to technological motifs yield complex and sublime results.

Wilson’s paintings are abstract constructions of squares, rectangles, and thin lines cutting between forms. Jarring shades of yellow, cobalt blue, red, and green are carefully placed in balanced yet dynamic compositions. Lines appear to change in hue or weight as they skim across differently colored grounds, each alternately framing or shadowing according to its context. Throughout, Wilson maintains complete control: he can make forms vibrate on the canvas or sit quietly in repose.

At heart, these paintings are deeply and directly connected to painters such as Josef Albers and Hans Hofmann, for whom investigations of chromatic interactions were the basis of formal compositions. Like these artists, Wilson plays with the saturation of different hues to create highly original, abstract representations of light and space. He searches for the outer limits of color’s power on a two-dimensional surface.

Wilson takes push/pull to a dazzling, complex new level. In “Big Squeeze” (2010), a grayish-plum rectangle rests between panels of rich magenta and cool blue-toned lilac, acting as the door to a narrow aisle between two monolithic forms. A dark color carves a deep line between forms in “Storm Chaser” (2010), creating the very striking illusion that the piece comprises two separate canvases. Subtle differences in color temperature activate the square forms. Some seem to slide right off the canvas; others pop out or beckon like a deep tunnel. Each painting is a constantly shifting landscape, alive with movement and ambiguity. One can enjoy these compositions indefinitely, trying to decode each space and organize its parts.

As might be expected of work today, these hard-edged compositions appear to have been constructed on a computer and printed by a machine. Their surfaces are smooth and even. Multiple layers of perfect rectilinear forms and impossibly straight lines could well be the products of Photoshop. But astonishingly, they are made by hand. Wilson first sketches each work with pencil on graph paper and then paints on canvas with flat drywall knives ranging in size from 12 inches to three feet (another similarity to Albers, who also painted with a palette knife). As a result, the paint surface is built up in areas, giving the paintings a very subtle dimensionality that enhances the spatial dynamics of each composition.

In some cases, an ephemeral light evokes natural phenomena, like the misty cloud cover of “Storm Chaser” or the watery blues and plant-like greens of “Bass Fishing” (2011). But for the most part, Wilson is interested in the artificial light of contemporary life. In “Big Blue” (2011), a gray square emanates light reminiscent of a computer monitor. Other works glow like a neon bulb or like the luminescence over a city block during the fleeting moment when lights have been turned on but the sun has not yet set. The paintings also have a decidedly technological edge. Lines travel across the canvas like the grooves of a circuit board. Gray squares with the proportions of computer screens are repeatedly centered amidst several layers of unaligned squares. The undeniable reflex is to reach for a mouse and calibrate the forms.

Wilson’s quest for beauty is not new. Nor is his examination of the limits of color as a space-making tool. But he does succeed in making oddly gorgeous and original paintings that embody the complexity and aura of life in the digital age. His work suggests that the questions artists pose may stay the same, but as the times change so do the answers. --Corina Larkin