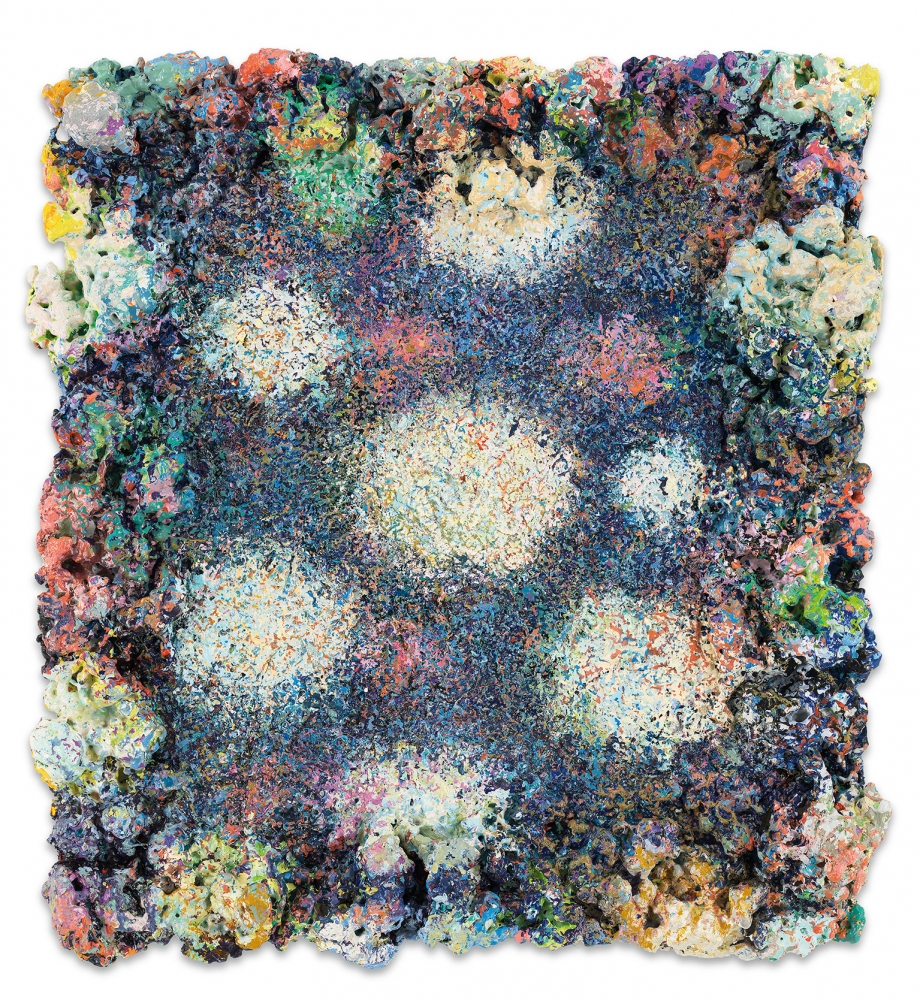 For the first time since early March, I went to a gallery. I walked there and back, avoiding people as much as possible. The exhibition I saw, by appointment, was Phillip Allen at Miles McEnery Gallery (May 21–July 11, 2020), his debut with this gallery. Allen has not shown regularly in the United States — I first reviewed his work was when I saw his exhibition Phillip Allen: oxblood at Kerlin Gallery (June 7–July 20, 2013) in Dublin, Ireland. Yet I have come to think of him as one of the most wonderfully challenging painters around.

Done on wood panels that project out from the wall to reveal the shallow box on which the paint has been applied, Allen’s modestly scaled works are immediate visceral and visual delights. Each painting is a combination of subtle, nuanced hues and globs of paint piled along the four edges, like an ornate frame, encircling a rough impasto interior. The density of the globs varies, so that each painting is different from the others, and requires fresh looking.

The challenge is direct and simple: what are we looking at? Is it a painting about the inseparability of color and materiality? What do we make of the impasto surfaces that contain abstract forms or patterns? Can we attune ourselves to the different ways that Allen accumulates paint along the edges, see the relationship between edges and interior, grasp the shifting hues and tones within the painting, and account for how each painting is different from the others? Working in this circumscribed manner, with an emphasis on materiality and color, Allen never repeats himself.

Allen has titled other paintings that I have seen and written about, “I blame it on Kosuth” and “Blue Stain (Cinderella’s Slipper Version)” (2012). I like that he considers many of his works “versions,” as if whatever he is after remains beyond his grasp. I also like the hint of self-reproach in the proximity of “hiss” and “mystique,” and the partially decipherable portmanteau of “mire” and “ovian.”  What the titles do is hint at the humor to be found, though there is certainly far more than humor going on in these works.

By evoking an ornate frame, the individual paint globs underscore that we are looking at a decorative object, possibly even a mirror. The globs can even be read as budding blossoms. But just as this view came to me, I was struck by their arresting physicality and shifting chthonic color. Other times, the globs remind me of what is squeezed out of a paint tube onto a palette or are what has been scraped off the painting and piled on a surface — beginnings and endings.

Allen’s cobalt blues and turquoises remind of grottos, minerals, and even Yves Klein’s belief in the infinite, while their texture suggests decay and encrusted surfaces. They are simultaneously solid and vulnerable forms.

This is what holds my attention. Are they to be read literally, metaphorically, or purely formally? The answer, of course, is that they are all three. They are paint as paint, paint as blossom, and paint as framing presence.

Allen’s paintings are animated by paradoxes that never resolve themselves. I am unable to say they are about this or that, or even, in some cases, whether they are abstract or representational. In “DeepDrippings (HissJovian Vision Version)” (Oil on board, 20 ½ x 18 ¾ inches, 2020), reds identify the lower area, shifting briefly into lavender before filling with dark blues in the upper area.

The combination suggests landscape, which is certainly a deep part of English painting, but Allen does something rare among modern English painters investigating the landscape: he rejects the picturesque. More importantly, he recognizes that a landscape consists of opposites: hard and soft, rough and smooth, sunlit and clammy, warm and cold, growth and decay. Looking at a David Hockney view of the Yorkshire countryside, you might never guess that the soil is rife with worms. While Allen does not explicitly present such a view of nature, I cannot help but be reminded of the damp, teeming earth when I look at his paintings. And yet, that is not their subject either.

This is why I find Allen’s work so compelling: Are his paintings about painting? Or do they have a subject? Or, as I believe, are they both, which is true of any really good artist working now. What distinguishes his paintings from that of other painters can start with this obvious fact: they do not look like anyone else’s work. His exploration and manipulation of materiality, particularly as it relates to color, further sets him apart.

As I see it, Allen has really struck out on his own path. He is a sojourner interested in the relationship between materiality and the sublime, and between the physical and the ineffable, without coming to a conclusion. This is why his paintings remain open. More important, for all of his interest in paint’s materiality, he has never settled into a signature style.

Allen shares something with two other English artists who escape categorization and exist in a resonant visual and physical world of their own making: Samuel Palmer and William Tillyer. His American counterparts would include Ralph Humphrey and Thomas Nozkowski. All of these artists celebrated paint’s materiality in different ways without ever fetishizing it. Born in 1967, and now in his early 50s, I consider Allen one of the great painters of his generation. 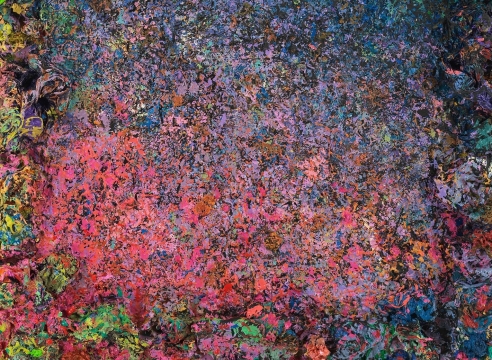