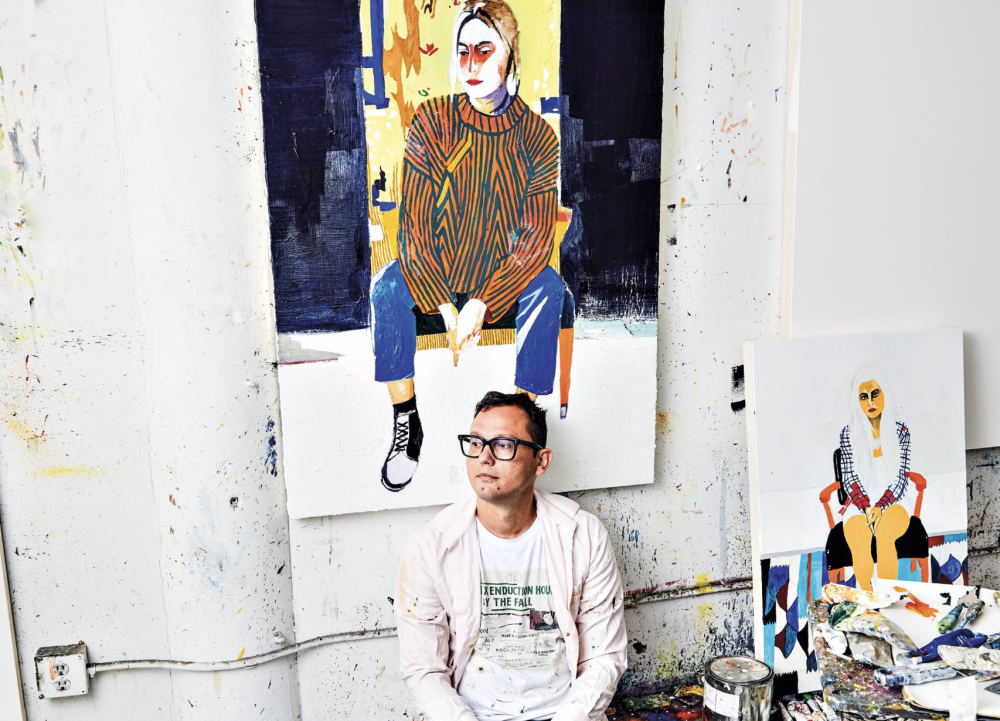 Raffi Kalenderian is featured as one of 11 finalists in Galerie Magazine's Emerging Artists Award Issue.

By depicting people from his everyday life in almost “claustrophobic” environments, Raffi Kalenderian creates a tension between intimacy and formality, depth and on-the-surface aloofness that’s hard to turn away from. “My paintings are generally known for their texture and materiality,” says Kalenderian. “Variation and experimental paint handling are a huge part of the process. Often there is some form of vivacious patterning, in the form of clothes or wood grain or plants, or maybe all three.” With solo exhibitions of his portraiture in California as well as Switzerland, Italy, Germany, and St. Barts, he is making serious waves with the discerning collector crowd.

Personal style: Kalenderian’s most recent solo show, “Memento Vivo,” at Vielmetter Los Angeles, featured paintings of unassuming subjects tucked within a riotous bouquet of vibrant foliage, their forward-facing poses a depiction of strength and perseverance in a setting that toys with scale.

Big break: “When I was a college undergrad, my painting professor Roger Herman ran a gallery in Chinatown called Black Dragon Society. He invited me and five others to be in a summer group show. They sold all of my work before the opening and offered me my first solo show. I was 22 and stoked out of my mind.”

Artistic influences: As a student at UCLA, Kalenderian was taught by the celebrated L.A. artist Laura Owens and studied the work of modern masters like David Hockney and Alice Neel. It was in Owens’s class that he first started experimenting with portraiture.

Next up: His first New York solo show, at Miles McEnery Gallery in Chelsea, opens in November 2020.