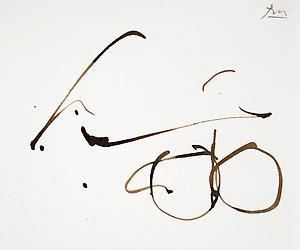 Love letters to James Joyce“Abstract Expressionist Robert Motherwell had a lifelong obsession with Irish novelist James Joyce. In 1948, Motherwell painted The Homely Protestant after opening a copy of Joyce’s “Finnegans Wake” and randomly placing his finger on a page to select the title for the painting. And in 1975 he painted The Liffey in homage to the modernist writer who used the Dublin river as the backdrop for one of his stories. But it wasn’t until 1983 that Motherwell’s admiration for Joyce was brought to a head with his organization of the International Joyce Society symposium and his simultaneous exhibition, “Robert Motherwell: Tribute to James Joyce”, at the Provincetown Art Association and Museum in Massachusetts.A series of 26 sketches made by Motherwell in 1982 in the run up to the symposium are on show at The Art Show (priced at $15,000 each, with ten sold on the opening night). The ink drawings refer to characters or scenes from Joyce’s “Ulysses”, so the series is named the “Dedalus Sketchbooks”, while individual works take titles such as Molly Bloom and Dublin Harbor. The sketchbooks were taken apart by the artist and framed in 1983 for an exhibition of his drawings at the Visual Arts Museum of the School of Visual Arts in New York, curated by Diane Waldman, a former curator at the Guggenheim Museum. “They were never intended to live their lives hidden in sketchbooks,” says gallery director Miles McEnery.”