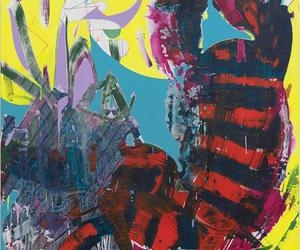 In Aikido Dream, his new solo exhibition at MCA Santa Barbara, the Los Angeles–based artist Tam Van Tran slips sideways through the gaps separating painting, drawing, and sculpture, using multiple procedures and unusual materials (chlorophyll and spirulina but also Wite-Out and staples) to create densely layered objects, some of them quite beautiful.

The Vietnamese-born, Pratt- and UCLA-educated artist was chosen for the 2004 Whitney Biennial and has pursued an idiosyncratic path ever since, creating work through innovative, highly process-oriented techniques and then labeling and showing these objects under fanciful, pop-surrealistic titles. For example, this show is named after a series of large paintings, the Aikido Dream series, featuring dark, expressionistic figures emerging from backgrounds lit with flashes of bright fluorescent color. Van Tran likes to promote his drawings into the realm of sculptural collage through the inclusion of elements taken from other media, such as clay from ceramics, zippers from textile design, and even holes punched with products from office-supply stores.

The most striking of the show’s multiple idioms is that which Van Tran created for his series known as the Beetle Manifesto. These three-dimensional works date from circa 2004 and involve a series of modifications including both construction and destruction. “Lord of Hot Butter” (2004), an intricate, glittery abstraction that calls to mind a giant butterfly is a great example. Beginning with a large sheet of heavy paper, Van Tran draws with acrylics, spirulina, and chlorophyll until the surface is densely covered with green and gray lines that run from edge to edge. After cutting the original drawing into thin strips, he crimps or hole punches each strip, and then reconnects all the pieces using thousands of staples. While the resulting art work retains some of the design elements present in the initial drawing, the slicing, dicing, and reconstruction process gives it waves of parabolic shape that warp its surface away from the wall. Although many of these techniques show up in some of Van Tran’s other works, it’s the fluttering shapes of the Beetle Manifesto pieces that stand out as his most resonant contribution to the contemporary art conversation.

Van Tran’s more recent works in mixed media, such as “Chinese Medicine” from 2013 and “Stencil’s Apprentice” from 2012, demonstrate an ongoing commitment to experimentation with materials not ordinarily found in paintings, such as rolled copper and palm leaves (“Chinese Medicine”) and glass and glazed ceramics (“Stencil’s Apprentice”). While these intricate compositions within the traditional rectangle of the painting repay close study, they lack somewhat in the excitement of the parabolic shapes of the earlier works. Elsewhere the artist recaptures the thrill of the new with some smaller-scale works that attack the spirulina with the hole punch to create paisley shapes that seem unexpected and new. For an artist with Van Tran’s remarkable facility with new techniques, such variety may well be a necessary condition of creativity. It will be interesting to follow his development as his career continues.

In the Bloom Project Room, Michael DeLucia has created an installation called “Appearance Preserving Simplification.” With Formica and plywood as his base materials, DeLucia uses computer design tools and a computer-controlled router to carve simulations of objects and furniture typically found in a generic corporate waiting room. The intersection of virtual reality and the gallery space has been a consistent subject of recent exhibitions at MCA Santa Barbara, and De Lucia’s sleek, disarming installation continues this line of inquiry with wit and imagination.