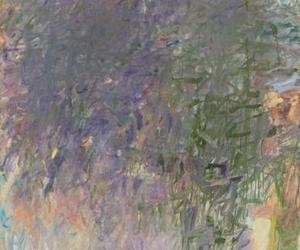 We know painter Wolf Kahn for radiant colors and landscapes that are more about formal and tonal relationships than they are about place. But in the 1960s, Kahn dwelt in the shadows. His paintings from that period make up the last exhibition at modernist gallery ACME Fine Art, closing its doors after 15 years. Owners Jim Bennette and David Cowan will continue their art-consulting business.

The show begins with “Into a Clearing,” which trembles with the agitated brushwork Kahn (now 89) employed in the 1950s. The clearing drops into cool violet as paler colors light up the edges. Watery ferns form a loose grid, paint dripping from their fronds. The work bristles, refusing to let the eye rest.

Then Kahn traveled to Italy, where he began to make quieter paintings, in muted tones. His gray, gently nuanced, nearly monochromatic Italian landscapes lean toward minimalism. In “Cypress Rows” the gray trees rise in sober columns, playing against a bluish sky that pales gradually across the canvas.

Color became substance. In Kahn’s sailboat paintings, made on Martha’s Vineyard, fields of nearly impenetrable mist imbued with blues and lavenders drape the simple verticals and triangles of the boats. Icing-thick white cloaks all in “Sailboat in the Summer’s Heat,” with just traces of a phantom vessel.

Yet Kahn gives hints of much going on beneath the surface. The blue in “Summer Sail,” while dense as fog, nonetheless holds light. The artist prods and mottles it into a living thing, plagued with grays, rimmed with breaths of paler blue.

The fog ends in a storm of drips above the bottom edge of the canvas. Kahn deploys this effect in many of the sailboat paintings. In part, it’s the artist demonstrating the craft and alchemy of paint. It also reveals a bouquet of underpainting – a suggestion of a history never to be known, and just as mysterious as whatever you may happen upon in the mist