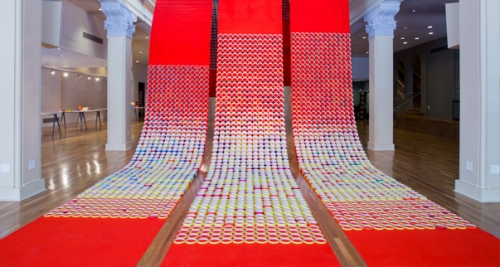 Yunhee Min & Peter Tolkin: Red Carpet in C is a collaboration between painter, Yunhee Min, and architect, Peter Tolkin. The idea for this project evolved out of Min and Tolkin's shared enthusiasm for music, architecture, and color. These interests let them to Goethe who described the relationship between architecture and music as "Music is liquid architecture; Architecture is frozen music." Conceived as performative architecture, this large fabric installation functions as both an object to be viewed and a space to be inhabited; a virtual translation of music into three-dimensions. Constructed of fabric and colored paper tubes, its soft, undulating parabolic shape is set in visual relief against the classical proportions, meter, and time signature of Culver Center of the Arts' historic atrium.

Yunhee Min & Peter Tolkin: Red Carpet in C is organized by the Barbara & Art Culver Center of the Arts at UCR ARTS and is co-curated by Tyler Stallings and Zaid Yousef. Yunhee Min & Peter Tolkin: Red Carpet in C has been possible with support from the National Endowment for the Arts, the University of California Institute for Research in the Arts, Spiral Paper Tube & Core, Francine Tolkin Cooper and Herbert Cooper, Susan and Jim Crawford, Clara and Tim Daniels, Freya and Mark Ivener, Avery and Miles McEnery, Marla and Jeffrey Michaels, Laurie and Marc Recordon, Jonathan Tolkin, and Barbara H. Hirsch. UCR's College of Humanities, Arts and Social Sciences and the City of Riverside provide support for UCR ARTS programs.

The team that made possible Red Carpet in C