NEW YORK, NEW YORK –  AMERINGER | McENERY | YOHE is pleased to announce an exhibition of paintings by Esteban Vicente.  The exhibition will open on 16 December 2014 and remain on view through 31 January 2015.  A fully illustrated catalogue with an essay by Christina Kee accompanies the exhibition.  Kee is a Brooklyn-based painter and writer as well as a Professor at the New York Studio School of Drawing, Painting and Sculpture where Vicente was one of the founding members.

Esteban Vicente was a Spanish born artist who moved to the United States in 1936.  By 1950, he was already a fixture of New York’s downtown art scene. Working alongside Jackson Pollock, Willem de Kooning, and Mark Rothko, Vicente assured his crucial role in the evolution of Abstract-Expressionist discourse. Painting nearly everyday by natural light, he attentively layered abstract and geometric shapes in delicate and sumptuous hues, with acute detail to the time of day and essence of space.

Exhibited here, these late paintings are resplendent with the spatial sensibilities of Vicente’s detailed studies of abstraction, natural space, light, color, and reflection.  With a sense of unparalleled immediacy, the artist’s expression of time, painted in richly rendered, ethereal palettes, is felt.  Similarly to Claude Monet, Vicente’s delicate tonal shifts illustrate a glimpse of universe that exists in an hour of time, and the subliminal world of color abstractions he subsequently discovered.

ESTEBAN VICENTE was born in Turégano, Spain in 1903.  His father was an army officer and an amateur painter who took the young Vicente with him on visits to the Prado Museum.  In 1920, Vicente entered military school, but left after three months.  At eighteen years old, Vicente began at the School of Fine Arts of the Real Academia de San Fernando in Madrid.  As a young man living in Madrid, Barcelona, and Paris, he developed friendships with artists and writers. In 1928, he had his first exhibition with Juan Bonafé at the Ateneo de Madrid.

Vicente spent a good portion of his career teaching.  He was among the faculty at Black Mountain College, Black Mountain, NC; the New York Studio School of Drawing, Painting and Sculpture, New York, NY; and the University of California, Berkeley, CA, among other institutions.

At the end of his life, the Museo de Arte Contemporáneo Esteban Vicente, a museum in his honor, was opened in Segovia by the Spanish government.  Vicente attended the museum’s opening in 1998.

Vicente died at the age of 97 in 2001 in Bridgehampton, New York, 10 days before his 98th birthday.  He had a long and prosperous career, living and working with multiple generations of artists and painting well into his 90’s at his home in Bridgehampton. 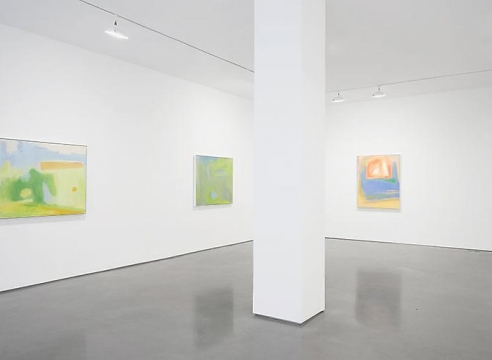