NEW YORK, NEW YORK – AMERINGER | McENERY | YOHE is pleased to announce its second solo exhibition of paintings by Liat Yossifor. Eight Movements will open on 19 March and will remain on view through 18 April 2015. A public reception for the artist will be held on 19 March from 6:00 to 8:00 PM.

Liat Yossifor’s gestural paintings are the result of three-day sessions where she approaches each canvas with one thick layer of oil paint.  Yossifor limits herself to working under this time constraint; painting continuously while the surface is still wet, physically pushing the colors with her palette knife until they begin to gray and the paint begins to set.

A key part of Yossifor’s process is editing what has been done, scraping the settled paint and restarting full paintings.  A finished painting is the result of many sessions in the studio and embodies multiple compositions.

Yossifor’s accelerated process keeps Eight Movements in constant flux as a body of work.  Small works entitled “Notes” accompany the large paintings as stopping points between full body exertions.  Large and small, the paintings echo each other but vary in temperature and mood.  Some works result in warm grays due to more frenetic painting sessions.  Others are cool and more precise, reflecting a slower tempo. Yossifor's method of moving circularly from the center of the painting is evident by compositions that seem separated from the untouched white edges and that are darkest from the center outward.

Her paintings are both the product of rhythmic action and a search for forms under the influence of time.

Liat Yossifor was born in Israel in 1974. She received her Bachelor of Arts degree from the San Francisco Art Institute in 1996 and her Master of Fine Arts degree from the University of California, Irvine in 2002. She completed her residencies at the Ucross Foundation, Claremont, WY in 2008 and as a guest of the Deutsche Borse Residency Program at the Frankfurter Kunstverein, Frankfurt, Germany in 2010.

She lives and works in Los Angeles, CA. 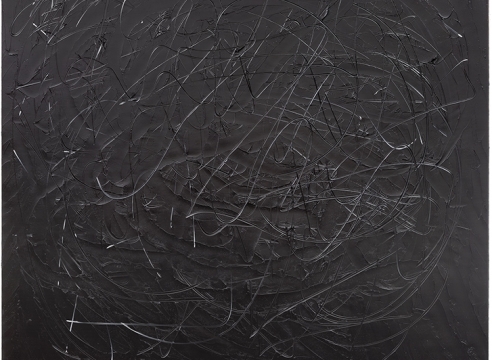