NEW YORK, NEW YORK – AMERINGER | McENERY | YOHE is pleased to announce an exhibition of recent works by Tam Van Tran. Black Melong will open on 16 February and remain on view through 18 March 2017. A public reception for the artist will be held on Thursday 16 February from 6:00 to 8:00 PM.

Tam Van Tran brings a singular view of the meditative possibilities of transcendence via his unique Vietnamese refugee enlightenment narrative. Known for channeling this possibility through mixed media works, in Black Melong Tran hones in on “the mirror that reflects our liberated potential” (melong in Tibetan). The exhibition features a group of highly tactile paintings in rich jewel tones that call viewers to see themselves in each. Hazy washes of color and defined geometries churn under raised patterns of tiny dots, each piece becoming both a mirror and a looking glass.

Building on his earlier Beetle Manifesto series of paper works that include dazzling configurations of hole punched dots and staples, Tran uses Black Melong to transform these dots into patterns that form shadows that increase the viewer’s awareness of background and foreground—creating space and separation between the two. The artist is interested in using the dots as a kind of magnification of the tiniest atoms to describe a rich and varied mental landscape that one can abide in.

In conceiving this body of work, Tran found inspiration in traditional Buddhist devotional paintings including those of the Newar people, a group that has historically inhabited the Kathmandu Valley and the surrounding areas of Nepal. While he was drawn to the figures floating in the space of these works, what remains in the resulting paintings are hat-like forms that connote particular lineages.

As a painter, Tran looks to create the deepest space possible, one that ultimately leads to a sense of self-awareness. In his eyes, “that’s what the best paintings do—they mirror one’s self and reflect a brief glimpse of no self.”

TAM VAN TRAN studied painting and received his Bachelor of Fine Arts degree in 1990 from Pratt Institute in Brooklyn, NY. In 1996, he attended the Graduate Film and Television Program at the University of California, Los Angeles, where he studied animation. 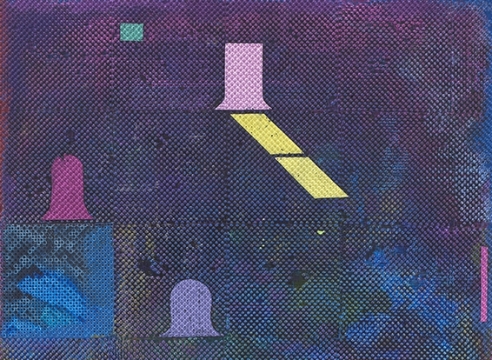