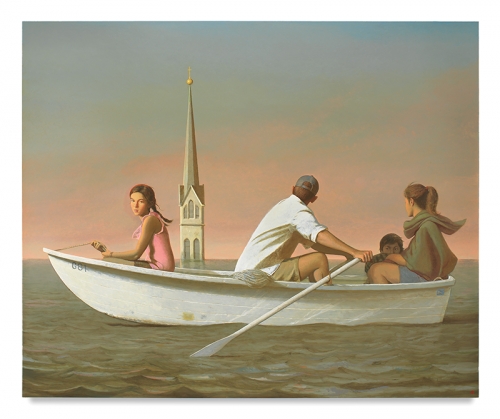 In 1807 William Wordsworth published a sonnet that could have been written yesterday. The World Is Too Much With Us today as it was then, perhaps even more so with 24-hour news providing information into conflicts around the globe and on our failure to be caring stewards of the world we live in.

The world is too much with us; late and soon,

Getting and spending, we lay waste our powers;-

Little we see in Nature that is ours;

We have given our hearts away, a sordid boon!

This Sea that bares her bosom to the moon;

The winds that will be howling at all hours,

For this, for everything, we are out of tune;

It moves us not. Great God! I’d rather be

A Pagan suckled in a creed outworn;

Have glimpses that would make me less forlorn;

Have sight of Proteus rising from the sea;

Bo Bartlett paints large narrative paintings that relate “to situations in the world right now – environmentally, socially, politically. I’m not taking a stand,” he says. “I’m presenting the problem. One of our jobs is to remain as objective as possible. To at least be aware and not fall victim to any side of propaganda.”

In the summer, he and his wife, artist Betsy Eby, live on a tiny island 20 or so miles off the Maine coast. Wheaton Island is adjacent to Matinicus Island and forms the eastern part of the larger island’s harbor. Wheaton’s highest elevation above sea level is 26 feet and it comprises about 20 acres of granite ledge and trees. When the world is too much with him, he takes his dinghy out for a row around the island, to clear his head and to become-as it were-grounded.

The dinghy is a recurring theme in his paintings. In The Flood, 2018, the rower (usually the artist) ferries his family over what was once dry land, attempting to secure their safety. It was inspired by the floods in Houston brought by Hurricane Harvey. The steeple of a church stands proud of the water and the parents gaze toward it as a symbol of hope. Their children, however, gaze into the watery distance hoping for hope.

Bartlett’s narratives relate to the world as well as to his own life. He carefully considers all possible interpretations of his final compositions through countless sketches. “I know enough about the figure and what it reflects unconsciously,” he says. “I have to be mindful not to project too much and leave it to others to decipher their own meaning of the paintings. As an artist, you have to know what the possible meanings could be before you start. You can’t create ambiguity. Ambiguity is a flaw.”

Diaspora, 2016, continues his exploration of the tragedy of Syrian refugees, making their way across the sea, some drowning on the way, some welcomed, some not, a tent city consumed by fire. Yet Bartlett says, “You have to paint your own story, what you know. I want the painting to be true to my own experience.” In Diaspora, the fire refers to the destruction of the bonfires on the beach. It suggests, as well, a funeral on shore. A man (Bartlett) carries a dead woman up from the shore. Bartlett’s youngest son, Eliot, died at 27. Eby’s ethereal abstractions are painted in part with fire. Eby and her friend, Lark, embrace at the top of the rock, gazing at the viewer, toward what may be a more welcoming future. “It’s an enigmatic scene,” Bartlett offers. “It relates to how I feel in relation to what’s happening in the world.”

His latest paintings will be shown at an exhibition at Miles McEnery Gallery in New York through July 7.

Among the paintings is a small gouache, High Tide, 2017, looking toward the sea from the French doors of his studio. High Tide is a reminder that living on an island “it could be a matter of time before the water is lapping at the door,” Bartlett says. The blue sky and water are the colors of Maine at its most striking although the soft, shifting, gray fog can create its own soothing mood.

Bartlett paints a gouache every morning “to warm up and get myself prepared for the more serious work of the day,” he says. “Gouaches happen fast. They’re painted in the moment. I grab a piece of paper and the painting is done in three hours. The colors dry the same as they go down. They’re done completely for myself. There are thousands of them. I can hide behind the big multi-level paintings but in the gouaches, everything is showing.”

The day after we talked, he emailed me with more thoughts about the gouaches. “I feel more vulnerable about this show than I have with others in the recent past. I’ve had over 60 solo shows, so I am accustomed to the whole process…but this show is different. Miles McEnery really liked the immediacy of the gouaches and wanted to show them. I’ve never shown them before…” The gouaches are not public statements…they are completely private…never painted to be shown…they are a part of my private mediation practice…done for myself…to keep myself balanced and in touch with reality in these crazy times…

“Especially in these times…with so many pressing social issues, I feel that it is important to balance the large public statements with these intimate subjects…the public and the private. Publicly we must address the larger issues…and privately it is healthy to find our own touchstones. This practice can keep one attuned to one’s own reality…one’s own truth. Painting these gouaches keeps me grounded…sane.”

Perhaps, as he rows around Wheaton and over to Matinicus, Proteus and Triton will rise from the sea and tell him that by sharing these intimate works he may help the viewer connect with what he calls the “inner-outer world.”