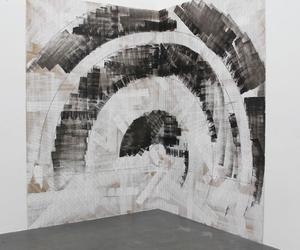 Since then the Berlin-based artist has developed a wide-ranging and eclectic arsenal of painterly means, that seeks inspiration not only from classic modernist painters but also in the observation of the design of everyday life and the aesthetics of punk or street graffitis. She is interested in how a geometrical vocabulary of forms is interwoven with society - starting with the Constructivists and their failed utopian aspirations for societal change, then the reappearance of the forms in the industrial design of the 50s and 80s, all the way to their everyday cultural use today. Her focus is on forms that refer to art history and their ambiguous meaning.

Shila Khatami's works are inspired by a modern history of abstract painting, by the observation of the everyday life, streets signs, the punk aesthetic and graffiti. Her privileged support remains the hardboard, one of the most traditional and cheapest materials for construction and isolation that can be found in hardware shops. This chic is motivated by the will of the artist to get rid of the heroic position of the painter and of his mythic attribute: the canvas tightened on stretcher. However, the punched hardboard offers another challenge: the surface is not plain but submitted to the geometrical and chequered organization of the holes. The artist can ignore this matrix as well as respectfully conform to it." Sammy Abraham Gallery, Paris (website)